This little item reminded me that Mitt Romney and I are the same age.

Mitt Romney turns 65 Monday, making him eligible for Medicare. But his campaign has confirmed that he will not use the government health care program. "No, he's keeping his current private insurance plan," a Romney source told CNN.

I wonder whether he gets the same junk mail I'm getting as I come within 3 months of Medicare: official looking envelopes that say in tiny obscure print "non-governmental document." I bet he does; the vipers that scam older people make their money on volume. Though most of us throw their crap out, a few elders get taken in and that's makes the "offers" profitable. 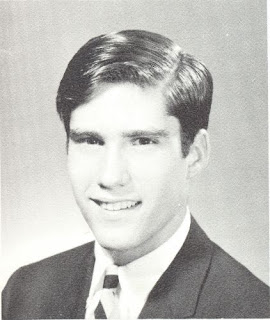 Actually, if I'd looked at Romney's high school yearbook picture, I'd have placed Romney's age instantly. Like me, he's high school class of 1965. Actually we turn out to have even more in common: both of us graduated from exclusive private schools in Rust Belt areas that catered to the children of the small class of wealthy citizens who expected to run the town -- and still did to some extent. Our circumstances were different though: his father actually did run his city (as president of American Motors) and his state (as governor); my parents were just the dying end of a line of folks who had run their city one hundred years previously. This discrepancy probably gave us somewhat different views of the world, plus being a lesbian in my case.

The young Romney looks like most of the boys I knew as a kid -- a dangerous mixture of cocksure and anxious. None of the ones I knew went to Vietnam; neither did Romney. An awful lot of our age peers did have to serve as cannon fodder in that imperial mistake. None of the boys I knew ended up in the public arena like Romney either, nor accomplished anything very notable. Has he done anything notable except chase a series of ambitions by any means necessary?

I guess he'll never have to join the rest of his age group on Medicare. Me, I'm fiercely glad that Medicare will be there for me a few months from now and I'll spend the rest of my days fighting any politician who seeks to undermine it. In fact, how about Medicare for All? Now there's a notion about what to do with the wealth of this country … stop invading other places and use our good fortune for our own people.

No, I don't think much of Mitt. I never did like those boys that looked like him.
Posted by janinsanfran at 8:09 AM