Nothing to be happy about in this 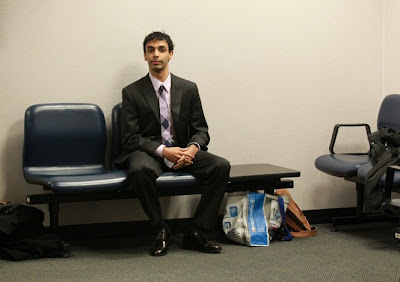 The case of Rutgers College freshman Dharun Ravi, convicted last week of invasion of privacy and "bias intimidation" (a "hate crime") for spying on his gay roommate, has haunted me. If the roommate, Tyler Clementi hadn't jumped to his death off the George Washington Bridge, we'd never have heard of any of this. But he did. Ravi wasn't charged with causing the suicide, but obviously that tragedy hung over the case.

What follows are some observations, but few conclusions. It's hard to see how any good comes of this.Meanwhile Tyler Clementi is still dead and coming out is still fraught with anxiety and sometimes rejection for young people. Nothing to cheer about here.

Photo by way of John Munson/The Star-Ledger.
Posted by janinsanfran at 6:00 AM

I feel the same way about this. We don't even know for sure that the defendant didn't do it because he himself is gay and not admitting it. His 'joking' about it doesn't tell a person anything. It is voyeurism in that case. We also don't know if the boy who killed himself did it because he didn't feel he could face who he was which comes back to society's sickness to not recognize this is natural. Just a sad case. One last thing, having been on a felony jury last summer, juries don't get all they might wish they could. A grand jury, which in Oregon at least, is also made up of the same type of jurors, can at least question themselves and ask the questions they might wish to know. In all cases though juries only get what prosecutors and defense lawyers give them. Sometimes it's not enough/

To add to this, I consider people who watch such stuff guilty also as they are adding on. Years ago I was in a chat room and chatting with someone privately. They told me one of the married couples had put on a webcam and people could watch them have sex. I said no thanks. I felt it was a kind of sickness to do that and equal to want to watch it. That marriage later went to a divorce which I don't know why but feel it was wrong to see it even when both people voluntarily chose to exploit themselves.