It might be easy to miss this, but concurrent with all the bluff and bluster about the health insurance reform somehow impinging on Catholics' freedoms, the nuns who run Catholic hospitals have filed an amicus brief with the Supreme Court supporting the law. A group representing the leadership of Catholic women's religious orders writes:

Amici believe that a civilized society must ensure the provision of basic healthcare to its citizens regardless of their ability to pay for it. They further believe it is a moral imperative that all levels of government institute programs that ensure the poor receive such care. They believe Medicaid expansion under the Act is critical to the communities they serve. 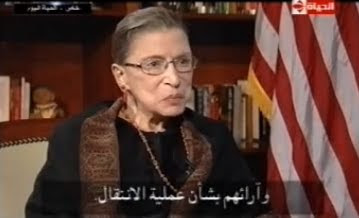 Meanwhile, Supreme Court Justice Ruth Bader Ginsburg has been visiting post-Mubarak Egypt. After 19 years on the highest U.S. court, dealing repeatedly with how our Constitution both succeeds and fails to structure a free society, she offered some words of advice on Al Hayat TV to Egyptians struggling with creating a new legal framework for their country:

Q: Would your honor's advice be to get a part or other countries' constitutions as a model, or should we develop our own draft?

A: You should certainly be aided by all the constitution-writing that has gone one since the end of World War II. I would not look to the US constitution, if I were drafting a constitution in the year 2012. I might look at the constitution of South Africa. That was a deliberate attempt to have a fundamental instrument of government that embraced basic human rights, had an independent judiciary. It really is, I think, a great piece of work that was done. Much more recent than the U.S. Constitution: Canada has a Charter of Rights and Freedoms. It dates from 1982. You would almost certainly look at the European Convention on Human Rights. Yes, why not take advantage of what there is elsewhere in the world? I'm a very strong believer in listening and learning from others.

Goodness -- is the woman perhaps not an American exceptionalist? U.S. right wing media think she is nigh on to a traitor. Interestingly, the video of the interview was uploaded by the U.S. Embassy in Cairo.
Posted by janinsanfran at 5:30 AM

The Catholic women I know support contraception. We prayerfully chose to "form our own conscience" as I was exhorted to do by my priest decades ago when I was told not to risk another pregnancy. 98% of Catholic women use birth control.