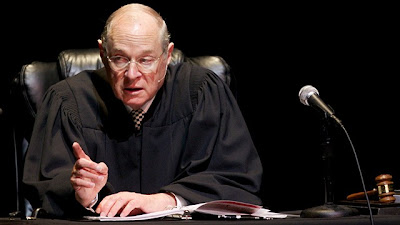 Count me as stunned by the Supreme Court ruling holding that "criminal defendants have a constitutional right to effective lawyers during plea negotiations." I am not a lawyer and I claim no crystal ball about what this decision may mean as its consequences are worked out in practice, but the very fact that five justices agreed and Justice Kennedy's opinion saw the light of day seems to me a significant and positive development.

You see, Kennedy announced a simple truth that amounts to revealing that the emperor has no clothes. Trials, juries and all that paraphernalia of justice that we see on TV has almost nothing do with what happens in our nation's courts -- and unless we find ourselves in that unfamiliar arena, most of us don't know that. The Justice explained how criminal "justice" works in the real world:

“Criminal justice today is for the most part a system of pleas, not a system of trials,” Justice Anthony M. Kennedy wrote for the majority. “The right to adequate assistance of counsel cannot be defined or enforced without taking account of the central role plea bargaining takes in securing convictions and determining sentences," …

Justice Kennedy, joined by Justices Ruth Bader Ginsburg, Stephen G. Breyer, Sonia Sotomayor and Elena Kagan, acknowledged that allowing the possibility of do-overs in cases involving foregone pleas followed by convictions presented all sorts of knotty problems. But he said the realities of American criminal justice required to the court to take action.

Some 97 percent of convictions in federal courts were the result of guilty pleas. In 2006, the last year for which data was available, the corresponding percentage in state courts was 94.

“In today’s criminal justice system,” Justice Kennedy wrote, “the negotiation of a plea bargain, rather than the unfolding of a trial, is almost always the critical point for a defendant.”

Now we know. The Supremes spelled it out.

Having the courts involved in judging whether ill-educated, often very young, frequently mentally disturbed defendants had competent legal advice as to their best interests when confronted by the power of the state has to improve the fairness of criminal proceedings.

Because I am working to end death sentences, I note particularly the Justice's mention of the heavy charges brought by prosecutors simply to coerce defendants into pleading out without trial. No wonder many District Attorney's want to keep the ability to threaten defendants with the death penalty. It is not surprising that if someone held by the cops thinks the state could actually kill him, he'll "agree" to pretty much anything to avoid what looks like the worst. Death Penalty Focus reports some of what can go wrong:

The threat of execution can be enough to scare people into taking responsibility for crimes they did not commit, especially since many of these confessions come at the end of grueling interrogations in which police are permitted to lie to suspects about the evidence, or lack thereof, gathered against them.  DNA evidence has exonerated a number of prisoners who are serving life sentences on the basis of these coerced pleas. As recently as 2009, the Governor of Nebraska had to release 6 prisoners, five of whom had falsely confessed, for a rape and murder that occurred more than twenty years earlier.  Peoples’ lives are ruined in this process, even if they are released. Richard Danziger, a Texas man put in jail because of an associates’ death penalty-inspired plea, suffered severe brain damage as a result of beatings he received in prison for a rape he had nothing to do with.

All defendants need competent lawyers throughout their encounter with the state AND we should take the death penalty out of the equation. Replacing the death penalty with a sentence of life without possibility of parole would make for more certain, less costly, and more just outcomes in the criminal justice system.

I don't want to just gripe here all the time. I do after all, quite frequently, encounter things and people that delight me. Hence this feature: occasional posts labeled "rays of effing sunshine." Photo via Blogonaut
Posted by janinsanfran at 5:30 AM

Link to NYT article is busted.