Yet more evidence it's time to go in Afghanistan 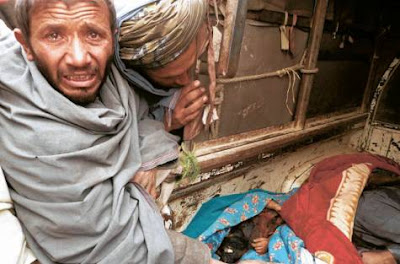 A man cries over the bodies of Afghan civilians loaded into the back of a truck in Alkozai village of Panjwayi district, Kandahar province on Sunday. Image Credit: AFP


An AP photographer saw 15 bodies between the two villages caught up in the shooting. Some of the bodies had been burned, while others were covered with blankets. A young boy partially wrapped in a blanket was in the back of a minibus, dried blood crusted on his face and pooled in his ear.

PANJWAI, Afghanistan — Stalking from home to home, a United States Army sergeant methodically killed at least 16 civilians, 9 of them children, in a rural stretch of southern Afghanistan early on Sunday, igniting fears of a new wave of anti-American hostility, Afghan and American officials said.

Residents of three villages in the Panjwai district of Kandahar Province described a terrifying string of attacks in which the soldier, who had walked more than a mile from his base, tried door after door, eventually breaking in to kill within three separate houses. At the first, the man gathered 11 bodies, including those of 4 girls younger than 6, and set fire to them, villagers said.

… Adding to the sense of concern, the killings came two days after an episode in Kapisa Province, in eastern Afghanistan, in which NATO helicopters apparently hunting Taliban insurgents instead fired on civilians, killing four and wounding another three, Afghan officials said. About 1,200 demonstrators marched in protest in Kapisa on Saturday.

Someone named Shaun Narine from Fredericton, Canada managed to say something semi-sensible in comments on the atrocity story:

I think that people in Afghanistan can probably accept the idea that a soldier will, from time to time, go crazy. It's not that surprising, if very unfortunate. I think that what may be worse is the incident mentioned in passing in this article -i.e., the death of four Afghan civilians and wounding of three more after being mistakenly fired upon by US helicopters. These "mistaken deaths" happen far too often and are the result of a matter of policy. This is the kind of thing that has made Afghans disgusted by and resistant to the ongoing American/NATO occupation.

My Canadian military friend got out with the rest of their forces a year ago. When are U.S. forces going to cut their losses and get out?
Posted by janinsanfran at 7:40 PM