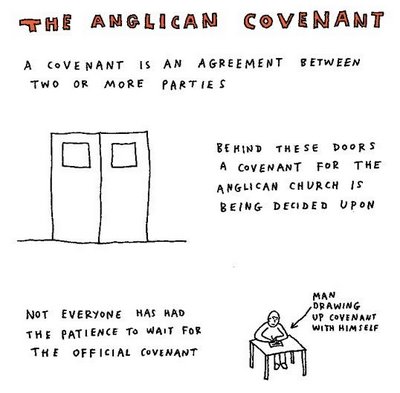 My friends who track matters Anglican are following with gusto the rather obscure question of whether the Church of England will decide to adopt something called the Anglican Covenant. This document would try to lay out for the various progeny churches of the English state church worldwide a statement of belief and a procedure for disciplining or even expelling branches off the imperial tree that stray from or embarrass other branches.

Though the Archbishop of Canterbury promotes the Covenant, it is not popular anywhere. In particular, it seems designed to vote the rambunctious colonials in the United States off the island for including gay people in the clergy and moving toward marrying us. At present the initiative looks to be limping badly, probably failing -- and even if the C. of E. did manage to sign on to the document, it would not make a hill of beans difference to U.S. Episcopalians struggling to be faithful bearers of the good news of God's love in our own backyards.

But in this context, it was interesting to read Tony Judt's description of the Anglican Church in Thinking the Twentieth Century. Tudt, a Jewish Brit and the unequaled chronicler of Europe in the second half of the 20th century in Postwar, grew up in the shadow of this strange institution.

The Church of England was and is a weird animal: at its most conservative, it is far more ornate and tradition-bound than its Episcopalian brethren here in the U.S. In essence, High Anglicanism was Catholicism without the Pope (and without the Latin, until the Catholics themselves abandoned it). On the other hand, at its low end, the Anglican Church -- as embodied in village communities, particularly in certain parts of eastern England where Catholicism was weakest -- can resemble (except in its liturgy, long since formalized under episcopal authority) Scandinavian Protestantism: under-adorned, its authority vested in a single, often rather gaunt and morally and sartorially restrained pastor -- the kind who figures so prominently in much English literature of the late nineteenth and early twentieth centuries, Protestant in all but name.

What unites this weird religion is its long-established identification with power. From that little church in a Norfolk village through the High Anglican cathedrals of Liverpool or York, this is the "Church of England." Historically, the link between church and state in England has been unusually intimate, the ruling elite overwhelmingly drawn from Anglican families and the church itself umbilically attached to the political establishment -- not least via its great bishops, all of whom sit in the House of Lords and have in past times exercised real clout. The bishops and archbishops were typically born of a small network of families, reproducing across the years a class of ecclesiastical administrators who might just as easily have been army officers, imperial governors, royal ministers and so on. The establishment identity associated with Anglicanism is thus of far greater significance than its rather nebulous theological markers. This was above all an English church; its Christianity could at times appear almost secondary.

It is bracing to see oneself as others see one. This description sure accords with my view of the Covenant kerfuffle. Any U.S. Episcopalians clinging to nostalgic Anglophilia are likely having a tough season.
***
More indicative of church life in the United States these days is probably this report via Reuters.

Banks are foreclosing on America's churches in record numbers as lenders increasingly lose patience with religious facilities that have defaulted on their mortgages, according to new data.

The surge in church foreclosures represents a new wave of distressed property seizures triggered by the 2008 financial crash, analysts say, with many banks no longer willing to grant struggling religious organizations forbearance.

Since 2010, 270 churches have been sold after defaulting on their loans, with 90 percent of those sales coming after a lender-triggered foreclosure, according to the real estate information company CoStar Group.

Yes, there are quite a few large, rich religious institutions in this country. But the deeper story is that many congregations of all sorts are in economic trouble, no longer the sole or even major community-building institution in their neighborhoods and unable to bring in the cash to support their activities.

The financial meltdown is wiping out the weakest. Lots of people probably think that is fine; religion has too often been a nasty, cramped imposition on too many of us. But these institutions are where people have met and made fellowship; I don't think virtual connections can replace the sort of face to face connections these institutions created. Even when I don't like their beliefs, I worry.
Posted by janinsanfran at 7:57 AM