The national GOP through a California lens 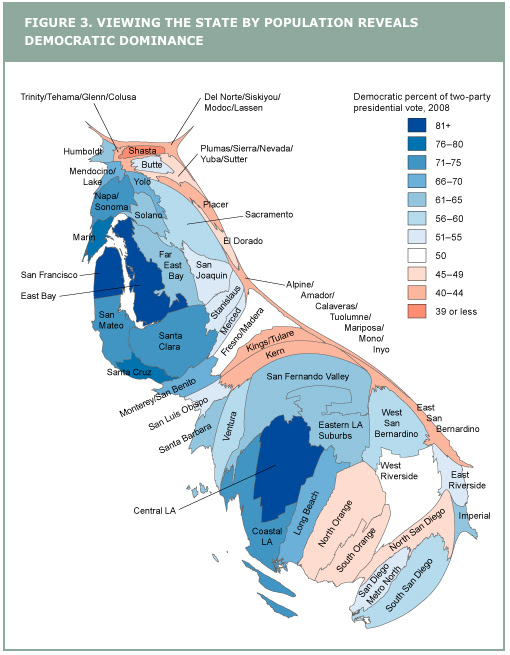 An article by Jonathan Chait in New York Magazine headlined 2012 or Never has been the buzz of the blogosphere this week. Chait describes the Republican presidential primary as revealing a GOP sensing its own demographic annihilation and gyrating accordingly.

The Republican Party had increasingly found itself confined to white voters, especially those lacking a college degree and rural whites who, as Obama awkwardly put it in 2008, tend to “cling to guns or religion.” Meanwhile, the Democrats had ­increased their standing among whites with graduate degrees, particularly the growing share of secular whites, and remained dominant among racial minorities. …Every year, the nonwhite proportion of the electorate grows by about half a percentage point—meaning that in every presidential election, the minority share of the vote increases by 2 percent, a huge amount in a closely divided country. One measure of how thoroughly the electorate had changed by the time of Obama’s election was that, if college-­educated whites, working-class whites, and minorities had cast the same proportion of the votes in 1988 as they did in 2008, Michael Dukakis would have, just barely, won. By 2020—just eight years away—nonwhite voters should rise from a quarter of the 2008 electorate to one third. In 30 years, nonwhites will outnumber whites.

Yup, that's the national future, a structural Democratic majority for at least a generation.

This is not news here. I'm a Californian who has worked in state politics off and on since the 1990s. That Republicans here find themselves confined to a dwindling base of the old, the white and the aggrieved is no news. We're been there and done that and mostly the national media have missed it, written the California experience off as some left coast oddity. We're living in the world on the other side of this transition; maybe the rest of the nation would be smart to look at where California has landed, for good and ill.

A strategy of managing slow decay is unpleasant, and history is replete with instances of leaders who persuaded themselves of the opposite of the obvious conclusion. Rather than adjust themselves to their slowly weakening position, they chose instead to stage a decisive confrontation. If the terms of the fight grow more unfavorable with every passing year, well, all the more reason to have the fight sooner. This was the thought process of the antebellum southern states, sizing up the growing population and industrial might of the North. It was the thinking of the leaders of Austria-Hungary, watching their empire deteriorate and deciding they needed a decisive war with Serbia to save themselves.

That last reference is to launching World War I. I think this the instinct in the dwindling Republican party as as choosing, repeatedly, to shoot holes in a leaking ship that carries them as well as everyone else. If you can't rule it, bring it down. Here in California, this took the form of enacting obstacles to taxation that ensured that the state would have a structural deficit -- it is impossible to capture a reasonable share of the wealth of the state for the purposes of the general welfare. That's a gift from the shrinking Republican rump. Our various anti-democratic obstacles to taxation -- rules adopted by white voters long gone that bar the legislature from simply enacting fiscal solutions by majority vote -- are the cause of California's notorious ongoing money crisis. The results include a once great state university system that is crumbling; crumbling canals and freeways; destitute urban centers.

You'd think that Republicans, seeing a growing non-white population, would attempt to attract the growing groups to their views. But they can't help themselves; they have to try to stomp on a rising demographic tide rather than channel it their way. Chait names their national strategy:

None of this is to say that Republicans ignored the rising tide of younger and browner voters that swamped them at the polls in 2008. Instead they set about keeping as many of them from the polls as possible. The bulk of the campaign has taken the form of throwing up an endless series of tedious bureaucratic impediments to voting in many states—ending same-day voter registration, imposing onerous requirements upon voter-registration drives, and upon voters themselves.

In California, they took an even more direct route to try to hang on for dear life. They tried to subvert demographic reality by popular vote while they could, creating structural barriers to citizen participation by the emerging majority. In 1994 they demonized immigrants (Prop. 187); in 1996, they outlawed affirmative action in state institutions (Prop. 209); in 1998, they outlawed bilingual education (Prop, 227); in 2000, they fought back against browning among the young people by pushing juvenile offenders into adult courts and prisons (Prop 21). Oh yeah, the same year they outlawed gay marriage (Prop. 22), not for the last time.

This sequence of barely veiled attacks on the emerging majority helped make California reliably and completely Democratic at the state level since 1998. Oh, but didn't you have Republican Arnold Schwarzenegger as governor for eight years? Yes, we did. The Terminator's elevation through a gubernatorial recall election is a perfect example of Chait's caution about his conclusions:

... short-term shocks, like war, recession, or scandal, can exert a far more powerful influence than a long-term trend ...

Republicans can break through as the currently configured party dwindles, but only in freakish ways. And it is worth nothing that the Governator in office could only rule by making some level of compromise with the overwhelmingly Democratic legislature; not even an action hero could turn back the demographic tide.

If the California experience is the paradigm, what's ahead for the nation at large? We're still in the denial stage nationally, much akin to 1994 here when Pete Wilson thought it was good politics to demonize Latinos in order to get elected. So expect ugly days, more figures like Sarah Palin, Rick Santorum and the Newt. But there is a glimmer of hope from the California experience as well. It doesn't seem to require demographic change to advance to numerical non-white majorities to get over the hump. A growing section of younger white voters, raised in a different world, shrug their shoulders at their elders and wonder "what is the problem?"

These folks elected Barack Obama in 2008; a smaller but similar coalition seems likely at the moment to re-elect him this year. Given the economic storm he has weathered and the rabid opposition he has encountered from Republicans fighting demographic death, that's a testament to the strength of the tide of change in the country. Though I cannot forgive him for his abandonment of any limits to extra-judicial executive power (ain't drone assassination of U.S. citizens a fun new tool?) he may well have been a more politically sure-footed president than I sometimes give him credit for, navigating the fraught waters of demographic change and drawing the crazy so personally to himself. We live in frightening, terrible times -- but I think everyone believes that of their times.
Posted by janinsanfran at 7:36 AM