Warming Wednesdays: The winter that wasn't and some political dirt

This global warming stuff is hard to think about. I find graphic presentations help. So here are two images from the indispensable Dr. Jeff Masters Wunderblog. 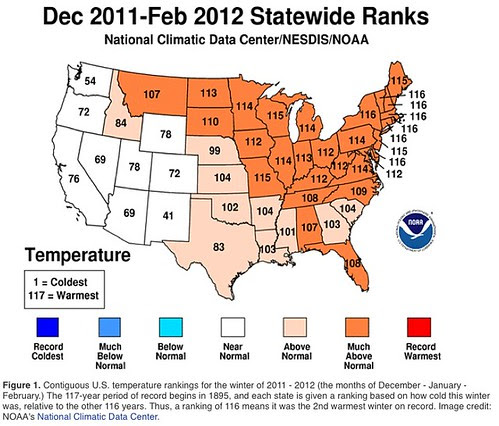 To put it bluntly, it has been downright warm the last few months in the areas of the country that usually get all that white stuff. According to Masters:

If you lived in the Northern Plains, Midwest, Southeast and Northeast, it seemed like winter never really arrived this year--27 states in this region had top-ten warmest winters. … If you live in the Midwest, you saved a bundle this winter on heating and snow removal costs. In Minneapolis, where the low temperature falls below 0°F an average of 30 days each year, the temperature fell below zero on just two days. ...In a normal winter, there are 13 days with sub-zero temperatures in Chicago. The coldest it got in Chicago this winter was a relatively balmy 5°F on January 19. 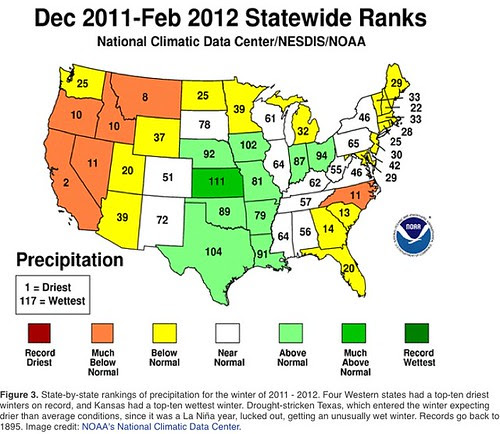 And though it is raining outside my window in San Francisco as I write, it has barely done so at all since December. It looks as if only a dried up Texas had a good season.

So much for good old climate predicability ...
***
Meanwhile on Tuesday …

Rick Santorum comes from behind in AL and MS
Here's the candidate spreading scientific ordure.

So Rick IShouldBeInASanitarium has conversations with plants?