Better to laugh than cry 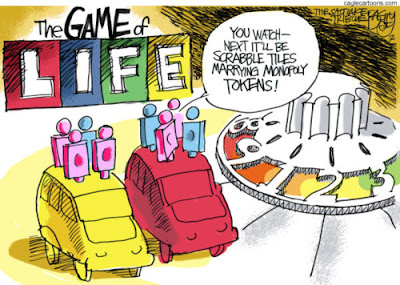 This cartoon is probably too light a treatment of what is a very serious matter. LGBT people in North Carolina today are living through a vote by their fellow citizens on whether they can really be members of the same community and human family. Not only would North Carolina's new constitutional amendment bar gay marriage, it would also outlaw domestic partnerships and a multitude of intermediate legal statuses through which same sex couple who love each other try to organize their lives. Polls say it will become North Carolina law.

Yet the cartoon also seems appropriate; when faced with ignorance and fear exploited by the unscrupulous for political advantage, what can you do but laugh?

This particular spasm of intolerance is on the way out; even our oh-so-careful president is being vigorously "evolved" by the pressures in his own base toward accepting the full equality of gay citizens. The arc of the universe is indeed bending toward justice, at least here. But living the arc is long and painful.


Posted by janinsanfran at 6:25 AM

I found it disillusioning when Billy Graham weighed into this when he normally has not. I think we can lay that to his being very old and his rigid, fundamentalist, bigoted son, Franklin, put pressure on him. Still it was depressing.