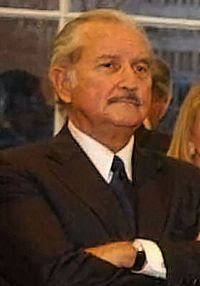 The Mexican novelist Carlos Fuentes died in mid-May. He was a complicated man with complicated political views. That's not an easy stance for anyone.

From 1934-40, he lived in Washington, DC, the child of the Mexican ambassador. He learned to defend his country, but on moving home, he acquired a greater wisdom.

I felt that the country [Mexico] was above criticism because it was so assailed by the Americans. So assailed by the United States, I had to defend it constantly. Well, I arrived and I found that it was not a perfect country and that I had to deal with the imperfections as well as with the ideals of Mexico.

And I discovered very quickly that criticism is a form of optimism, and that when you are silent about the shortcomings of your society, you're very pessimistic about that society.

That seems the only healthy sort of patriotism to me.

At the age of 83, Fuentes took to Twitter. According to Noah Cohen this was his last tweet:

There must be something beyond slaughter and barbarism to support the existence of mankind and we must all help search for it.

Yes.
Posted by janinsanfran at 5:30 AM