The real Romney: his word is worthless 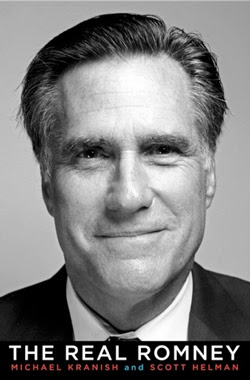 Since I'm likely to spend the next six months (or even the next six years) maligning the guy, I figured I'd better find out something about the life of Mitt Romney. Fortunately, a couple of Boston Globe investigative reporters, Michael Kranish and Scott Helman, have provided a biography of their former governor, The Real Romney.

Though I'm sure that this volume is not viewed with delight by the Romney campaign, it isn't a hit piece. These reporters try to set flamboyant and unpopular elements in Romney's Mormon faith in historical context and to avoid sensationalizing the choices of distant ancestors. They worked hard to uncover episodes of personal generosity that Romney apparently has chosen not to exploit for his campaign. They insist that in the tiny tight circle of his family, Romney is loose, funny, even silly -- the antithesis of the awkward man with the infinitely malleable persona, of what Charles Pierce has aptly named "the Romneybot."

I've already written about the the insights my own background gives me about Romney's high school days. The Real Romney reminded me we had something else in common: in 1965 we both left the Rust Belt for the novelties of California, I to Cal Berkeley, he to Stanford. I assimilated with delight. Romney seems to have been glad to quickly escape the emerging counterculture to serve as a Mormon missionary to France and then to hunker down in Utah. Dude missed the Sixties; too bad, he might have made something interesting of himself if he had ever loosened up. Instead he showed his mettle by getting rich, by playing financial games. He seems to think his mastery of slash and burn capitalism entitles him to the presidency.

I did glean a few insights from this book, not so much from the narrative which emphasizes accuracy and fairness to the verge of dryness, but from oddments recounted but not emphasized. I was surprised to notice that Romney the executive and Romney the pol seems to be quite accustomed to having women around who occupy significant professional roles. For example, his 2008 campaign manager was a woman. So were significant lieutenants in Massachusetts government. He does not deny himself the best employees on the basis of gender, apparently.

There's an adjective for Romney and his milieu that turns up repeatedly in this book that struck me as apt. The authors call the Republican champion "patrician." That's an unusual descriptor for a U.S. politician. Usually even our wealthy politicians strive to communicate that they are just energetic common men, cut from the same cloth as the rest of us. Democratic leaders project that they are the products of a meritocracy. Are Republicans really ready to argue for an aristocratic father figure? Apparently yes, if he has enough money. Still this is an interesting deviation that may not wear well.

This book also demonstrated that Romney's word is worthless. He will adopt any lie to get what he wants. Just about his only accomplishment that has served the public as opposed to his private good is the Massachusetts health care law on which Obamacare is modeled. Kanish and Helman tell the story of its final passage. The last hurdle between Romney (and the business interests the governor represented) and the Democratic legislature was the question whether businesses that failed to provide health insurance to employees would be charged a fee by the state. Various interests argued round and round. Finally big business leaders agreed on a "fair share contribution" of $295 per uncovered worker to be paid by businesses with more than 11 employees. It looked like negotiations had succeeded. Here's the rest of the story according to these reporters.

… now Massachusetts was finally on the precipice. And, Romney, who had invested whatever political capital he had left, was a big reason why. He was jubilant. "Today, Massachusetts has set itself apart from every other state in the country,"' he said, beaming, after lawmakers publicly unveiled the bill. …

Given Romney's reticence about penalizing employers, his rhetoric on that issue caught the press corps by surprise. Asked if there were any parts of the bill he would veto, he said he still needed to review it all but, "We are where we'd hoped we'd be." Didn't he consider the penalty on employers a tax, as anti-tax activists did? And hadn't he pledged to veto any taxes? "It's not a tax hike;" Romney responded. "It's a fee. It's an assessment." Businesses and workers who purchased health insurance already paid an assessment to help fund the "free care" pool, he noted, and "it makes sense to expand this assessment."

As the press conference wore on, Romney reserved his right to review closely the employer assessment and other elements that had been added by the Democratic legislature. But his tone throughout signaled that he had no major objections. Toward the end, he was asked again: was he really okay with the new employer penalty? Romney said he was relieved that what he had feared most -- a new, broad-based payroll tax on employers -- was not in the plan. That was something, he said, that he "definitely would have been unable to sign." "This" he continued, "is of a different nature."

The next day, April 4, the bill sailed through the House and Senate with virtually no opposition. They called it "An Act Providing Access to Affordable, Quality, Accountable Health Care." A signing ceremony was set for April 12, 2006, at Boston's historic Faneuil Hall. Romney and state lawmakers knew they had done something big.

The bipartisan bonhomie did not last long, however. The day before the ceremony, Romney published an op-ed in The Wall Street Journal whose cheery title -- Health Care for Everyone? We Found a Way" -- masked a last-minute shift. His "Democratic counterparts" he wrote, had added a $295-per-person fee on employers that refused to help cover their workers. The same fee he had seemed comfortable with just a week earlier he was now labeling "unnecessary and probably counterproductive." He promised to "take corrective action" which meant a veto. Democrats felt sandbagged. This was a compromise that had been carefully worked out among many parties, including the business community. It would not raise a huge amount of revenue -- $45 million was the estimate, and even that has proven to be overblown. But the principle was important to many involved in crafting the bill; employers had to put some skin into the game, too.

Right before the April 12 signing ceremony began, Romney aides announced in a press release that he was vetoing 8 of the 147 sections, including the employer mandate. There was little risk to Romney, who knew that the legislature would easily override him, as it did three weeks later. He could thus claim a large share of credit for the new law while washing his hands of something resembling a tax, which was problematic with the national Republican audience he was now courting heavily. …

I don't want to be governed by someone that two-faced. The man acted as a slippery operator, even in his moment of public triumph. How nauseating.

Mitt Romney's much admired father George, a Michigan governor, walked out of the Republican convention in 1964 and refused to endorse Barry Goldwater because of the nominee's opposition to equal civil rights for African Americans. George never got to be president -- he was bested by tricky Dick Nixon for the nomination in 1968. Mitt isn't going to allow allegiance to principle to get in the way of going where his father failed to climb.
Posted by janinsanfran at 7:00 AM

Romney is a lot like GW Bush for how they were influenced by their fathers in the worst possible ways. It is going to be really tough to have to hear this guy talking for the next six months and listen to people praise him as one did on the Bill Maher show the other day-- as how generous he was in charity. Maher nearly fell out of his chair as he spatted out the charity all went to his religion. It's going to be a very long six months is all I can say.

George Romney's claims of being "brainwashed" didn't help him, either.

I remember George Romney saying he'd been "brainwashed by the generals" in Vietnam. It seemed a remarkable outbreak of honesty to me, since the generals were always claiming victory was just around the corner. Sort of like Afghanistan.