BHO made me happy 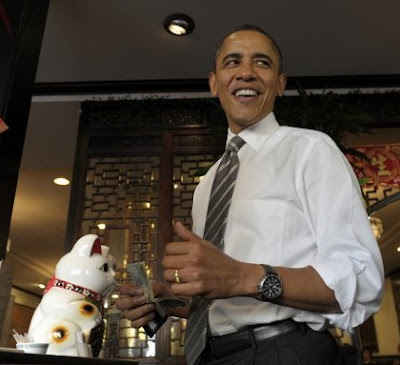 I should say something about the President having completed his "evolution" to accept and endorse gay marriages (under state laws). The president made me happy. I'm surprised at how happy he made me.Barack Obama made me happy today. It has been several years since I've been able to say that.

The President stopped off for Chinese food on fundraising trip to San Francisco in February and was captured by press photographers turning on the charm.

Yup! Made me happy too! Let's move this country into the 22nd Century!

It's about time that intolerance took a back seat to a fair and just society. The bigots will die off and the young people will see a time when everyone is equal.

I am happy that we, as a nation. are on our way to that happening. Three cheers for Obama.

I'm from that downunder Land of Oz. Our Prime Minister, Julia Gillard, has come out against marriage equality. This is a bit of a surprise really. We would not have picked her to be that sort - she is a childless single woman living in the Prime Minister's Lodge with her man.

Of course, now that Obama has come out people ask her if she will change her view. She says 'NO'.

What we really think is that the right-wing within the Australian Labor Party from whom she has drawn support for her position as PM has dug its toes in and won't cross the bridge to marriage equality.

Time alone will tell if the lady is for turning.