Score one for Wells Fargo and the one percent 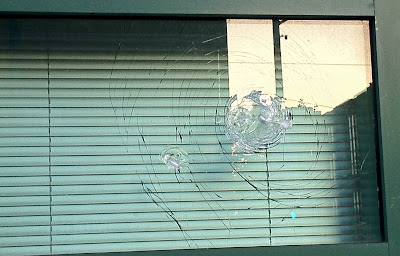 Last week a small irresponsible wrecking crew took advantage of a pre-May Day rally loosely identified with Occupy movement to go on a rampage of paint throwing and window breaking in the 16th Street area. Some 15 small businesses -- and zero big corporations -- were the targets.

So guess who gets to play kindly uncle to the damaged enterprises? That's right -- Wells Fargo Bank, the target of legitimate protests against its foreclosure practices and exploitative payday lending. The big bank has pledged to help the distressed merchants. (I'll be curious to see how long it takes the city to fix the cop shop.)

Great publicity for the cause of the 99 percent, folks!

Here's a comment from a discussion of a different brick throwing incident that marred a May Day protest:

I saw an Occupier on TV commenting on the brick thrower. "He's an autonomous individual," was part of the quote. That's the heart of the problem right there. Once you support "Diversity of Tactics," you refuse to draw a line. You refuse to say, THIS is not us. So you can say the brick thrower is an outside agitator or just acting autonomously, but by refusing to make a judgment about what you will and will not accept, you embrace the worst of it.

I don't know if that's quite fair either. Perhaps "embrace" goes too far. But it is incumbent on all of us to say "no" to violence while we push our case for change. There can be no room for stupid wanton destructiveness in the movement for economic justice. Such behavior is a luxury we can't afford.

Authentic movements unleash passions -- surging anger and also a fierce joy in struggle -- that can shade into violence. But authentic movements that win require discipline, individually and collectively. The people of this country don't have a lot of experience with discipline -- applied delayed gratification -- but we need to learn some if we want to make this a better place.

UPDATE: The same day I posted this, a group of Occupy stalwarts repudiated the violence on Valencia and questioned the intentions of those who perpetrated it. I an acquainted with two of the people quoted and am certain that vandalism is not their style or purpose.

The question remains, how do social movements prevent outbreaks like this, whether from their ranks or by infiltrators?
Posted by janinsanfran at 6:00 AM

We have all seen anarchists movements do violent and even deadly acts. Occupy might want numbers but its saner heads know they will never get anything if they turn to those methods.

A recent article told of a beautiful young Greek woman who worked in a bank, a respectable bank in a respectable neighborhood. She felt safe there even though it was a big bank and there were anarchists actions in Greece. She also died in that bank when it was firebombed by an anarchist movement from their legitimate movement with real demands. It doesn't work to build support when that happens.

Occupy here cannot turn the banks and rich people into villains because if it does, the radicals will take it as carte blanche.

For any hope of real change, the goal has to be change the system and you do that by getting people to run for office and then enough others to vote for them. You convince people of the rightness of your ideas and that it can work. Riots on the streets will only lead to crackdowns.

To me, as someone looking at this from outside, Occupy started by showing a big group behind them. Now it's put up or shut up and get people elected with a real plan for change. This is still a democracy. Convince people of the rightness of their positions or lose is how that works.

What Rain said. The Occupy group with which I'm associated is dedicated to positive change. We don't demonstrate much but do things to improve our community.