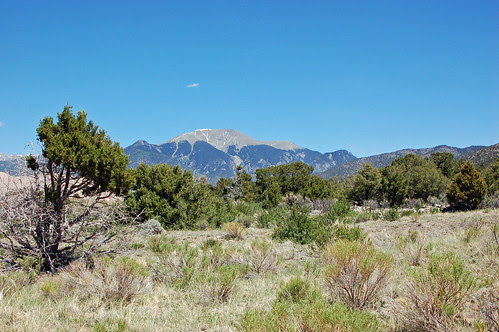 David Gushee is a Christian ethicist, the president of Evangelicals for Human Rights and a scholar of the Holocaust. He has written a fascinating exploration of why an optimistic alliance of scientists and conservative Christians formed five years ago has had little success in raising concerns about what the human species is doing to the planet. You can read the whole thing. What follow are some excerpts from Gushee's observations:

Religion and science are not in fact “the two most powerful forces in the world today.”
I asked several of the participants in our initiative how [biologist E.O.] Wilson’s claim [that science and religion allied could heal the planet] looks five years later. Most thought that he was right, but that the potential of a religion-science partnership had not yet been fully realized. But in the cold light of 2011, it seems more accurate to suggest that corporate power, allied with the political power that it buys, combined with popular economic fears, together with a loss of confidence in scientific research, are collectively far more powerful than religion and science, even were they to achieve a miraculous reconciliation.

Follow the money—it’s one of the oldest truisms in politics. It is also a pretty significant theological claim as well, when we take the form of human sin known as greed into account—or, for that matter, the enduring power of simple economic self-interest.  …

Christianity, still the dominant religion in the United States, is not easily turned to care of the Creation.
For those Christian communities in which the Bible remains the central source of authority and the sacred text studied and preached each week, the inherent limits of the Bible’s creation-care resources are significant. …The Bible primarily tells a story about God’s relationship with humanity. …the beating heart of the story -- at least, as it has been understood in centuries of Christian tradition -- is a particular telling of God’s redemptive love for human beings.

And that is still what people come to church to hear. Most who step into a church on a Sunday do so in order to hear the good news that God loves them. They seek resources for thriving or at least surviving their daily lives. They come broken and beaten down, weary and stressed, hoping for enough “spiritual food” to get through the week. They don’t want to hear about biodiversity. They want to hear that they are okay, that God is on their side, that all will be well. ...

Human beings are deeply alienated from the Creation. We do not love it.
Fewer human beings live in any significant organic contact with the Creation than at any time in human history. The family farm is a distant memory for most. We live in near-total disconnection from nature. We are creatures entirely of civilization and its barely comprehensible technical and bureaucratic processes and structures….

Most of us do not make sacrifices for people or causes that we do not really love. I will sacrifice all kinds of things to pay for my child’s college tuition, but not your child’s tuition, because though I love your child in theory, I love my child in reality. It may be that the ultimate reason why good science and humane religion may not succeed in saving the Creation is because there are not enough human beings who actually love this good yet distressed world. It may be that from a long-term ecological perspective the most important line that divides human beings is not that between religious believers and unbelievers, but between those who love the Creation and those who do not. This line cuts across religious traditions and goes right to the human heart. …

A few comments of my own: In addition to "Warming Wednesdays," I often tags these posts with "annals of the anthropocene." I believe that latter characterization of our times is accurate: our species has evolved to be able to define what "life" means on our planet. We have no alternative to taking responsibility if we want future generations to live here.

H/t The Lead for the Gushee article.