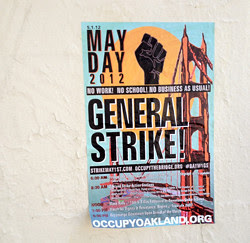 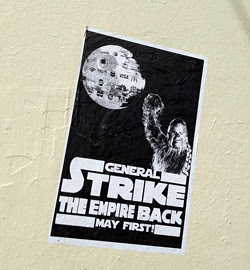 The wheatpasters were active in the 'hood this weekend. 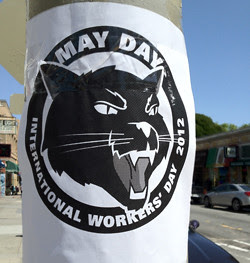 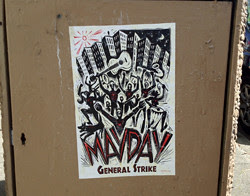 I'm out of town today, so I don't know what may come of this effort, if anything.

I rather like this reflection on May Day from Noam Chomsky:

If you're a serious revolutionary, then you are not looking for an autocratic revolution, but a popular one which will move towards freedom and democracy. That can take place only if a mass of the population is implementing it, carrying it out, and solving problems. They're not going to undertake that commitment, understandably, unless they have discovered for themselves that there are limits to reform.

A sensible revolutionary will try to push reform to the limits, for two good reasons. First, because the reforms can be valuable in themselves. People should have an eight-hour day rather than a twelve-hour day. And in general, we should want to act in accord with decent ethical values.

Secondly, on strategic grounds, you have to show that there are limits to reform. Perhaps sometimes the system will accommodate to needed reforms. If so, well and good. But if it won't, then new questions arise. Perhaps that is a moment when resistance is necessary, steps to overcome the barriers to justified changes. Perhaps the time has come to resort to coercive measures in defense of rights and justice, a form of self-defense. Unless the general population recognizes such measures to be a form of self-defense, they're not going to take part in them, at least they shouldn't. …

That's a perspective on revolution from a democrat (small "d"). I am frustrated with people who think they can make a revolution without a large majority of the people behind them. Democracy is slow, incomplete, and always precarious, threatened by autocrats and plutocrats who bend its institutions to their benefit. But I'm too much of an historian to think our species has invented any better way to organize our societies.

I still like the thought from the Declaration of Independence:

Governments are instituted among [people], deriving their just powers from the consent of the governed ...

That's my May Day sentiment. It's not as if we didn't have a lot of work to do to get there.
Posted by janinsanfran at 6:00 AM