On Mitt Romney as high school bully of gay boys 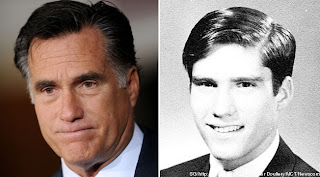 In this week of conversation about matters gay, it feels as if I ought to comment on the Washington Post story of young Mitt's prep school "pranks."

BLOOMFIELD HILLS, Mich. — Mitt Romney returned from a three-week spring break in 1965 to resume his studies as a high school senior at the prestigious Cranbrook School. Back on the handsome campus, studded with Tudor brick buildings and manicured fields, he spotted something he thought did not belong at a school where the boys wore ties and carried briefcases. John Lauber, a soft-spoken new student one year behind Romney, was perpetually teased for his nonconformity and presumed homosexuality. Now he was walking around the all-boys school with bleached-blond hair that draped over one eye, and Romney wasn’t having it.

“He can’t look like that. That’s wrong. Just look at him!” an incensed Romney told Matthew Friedemann, his close friend in the Stevens Hall dorm, according to Friedemann’s recollection. Mitt, the teenaged son of Michigan Gov. George Romney, kept complaining about Lauber’s look, Friedemann recalled.

A few days later, Friedemann entered Stevens Hall off the school’s collegiate quad to find Romney marching out of his own room ahead of a prep school posse shouting about their plan to cut Lauber’s hair. Friedemann followed them to a nearby room where they came upon Lauber, tackled him and pinned him to the ground. As Lauber, his eyes filling with tears, screamed for help, Romney repeatedly clipped his hair with a pair of scissors. …

“It happened very quickly, and to this day it troubles me,” said Buford, the school’s wrestling champion, who said he joined Romney in restraining Lauber. Buford subsequently apologized to Lauber, who was “terrified,” he said. “What a senseless, stupid, idiotic thing to do.”

“It was a hack job,” recalled Maxwell, a childhood friend of Romney who was in the dorm room when the incident occurred. “It was vicious.”

“He was just easy pickins,” said Friedemann, then the student prefect, or student authority leader of Stevens Hall, expressing remorse about his failure to stop it. …

I feel as if I already had my say about this aspect of the man's history before the particular story surfaced. But the story rankles so I'll tell it again.

In 1965 I graduated from another northern, rust belt prep school that was the analogue of the one that Ann Romney attended. We were loosely paired with a boys school much like Cranbrook. I am -- and even then knew I was -- a lesbian. This was a brutal environment in which to be gay in those years. Frequently the excitement and tension that most adolescents experience in coming to sexual awareness was channeled into abusing anyone suspected of being "queer." Casual jokes about queers were the norm, but worse, anyone thought to be "one of them" was fair game for taunting and "jokes." Those of us who were gay were forced to avoid each in order to try to escape taint, so it was incredibly lonely. Having observed the boys, I'm sure that among them it was worse. Quite a few of us excelled academically because it won us some protection from the faculty, even if it further alienated the popular ones and the jocks.

I wouldn't be surprised if Romney really didn't remember any of what the WaPo reports -- the behavior described was so casually his natural right in that situation that it didn't merit recall. What he remembers is that he enjoyed his prep school days and that, by the standards of that place, he did right. And, as in so many arenas, he seems never to have understood that all his life he has enjoyed unchallenged access to privilege and power utterly unknown to most of us. That's what the popular boys were like. Most probably eventually learned that life is more challenging than that, but apparently not this Cranbrook boy.

I have no nostalgia for those times at all. And I certainly don't want a President for whom those times are any kind of touchstone of normal life.

Posted by janinsanfran at 10:48 AM

This guy is a pathological liar and obviously a bully all his life. He's a lot like Sarah Palin as I see it. If he gets in, he will try to get an amendment to get his own sick view of life into the Constitution. If we don't all get ambitious about working for Obama, we are not paying attention!

Frankly, I think he's a nutcase, a bully and a nasty man who has never changed at all. It scares me to imagine him having more power than deciding his house needs an elevator for all his cars...