A guest post from my friend and WarTimes/Tiempo de Guerras co-conspirator, Max Elbaum

The front page of Thursday's print edition of the New York Times is worth putting in a spot where you can pull it out and take a look every week for the next six months (at least). It provides a penetrating glimpse into how race and racism is going to unfold in this crazy country over the next while and beyond. 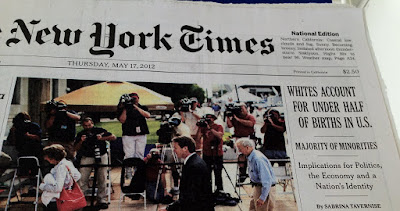 On the top right-hand column the lead story is that for the first time in history non-Hispanic white births do not make up a majority of births in the U.S. It's another key marker in the underlying demographic trends that are reshaping the country.

On the top left, meanwhile, there's a story under the headline GOP Super-PAC Weighs Hard Line Attack on Obama. The content is simple: this bunch thinks McCain lost in 2008 because he didn't utilize enough racist fear-mongering in his campaign and they don't want to make the same mistake twice. Anyone who thinks it's an accident that this feature runs on the front page the same day as the changing demographics story isn't familiar with the modus operandi of the New York Times.

What's not mentioned in the Times story are two new 'documentaries' about Obama; you can find information about those in Andrew Sullivan's short blog post which concludes as follows: "This is about rescuing white America from a black president. That's all it is. And it's as vile as it is potent."

More in that vein just off the press from a Colorado Republican Congressman: "I don't know whether Barack Obama was born in the United States of America. I don't know that. But I do know this, that in his heart, he's not an American. He's just not an American," -- Congressman Mike Coffman (R-CO) at a recent fundraiser.

Of course, today's Times also contains plenty of stories that detail reasons why we on the left are mobilizing this weekend in Chicago to protest against Obama administration policies. To take just one example, the statement leaked yesterday by a U.S. official that, though Washington doesn't want to use them, plans for a military strike on Iran haven't just been made, they are all 'ready to go' if needed.

So there are lots of dilemmas and difficult challenges facing us over the next while. But one of the biggest is that as the proportion of people of color steadily grows in the U.S., attempts by the racist right to entrench white supremacy by any means necessary are going to grow as well - and it's squarely in that context that the next six months are all but certain to see the biggest outpouring of blatant, coded and every other kind of racism in a presidential campaign since George Wallace ran on his record as a militant segregationist in 1968.

As William Faulkner once put it: "The past is never dead. It isn't even past."

This country is still fighting the Civil War. Here's an article from a conservative commentator making exactly that point.
***
Addendum from janinsanfran:
In our outrage over the racist ad campaign revealed by the Times (and now walked back), it is easy to skip over this smidgen of wisdom captured in the demographics article.

“The question is, how do we reimagine the social contract when the generations don’t look like one another?” said Marcelo Suarez-Orozco, co-director of Immigration studies at New York University.

That indeed is a question our politics is currently failing to answer.