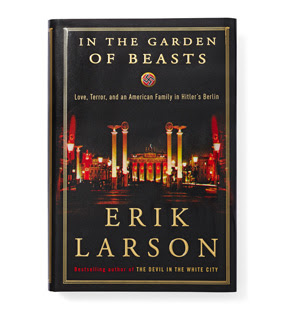 For members of my age cohort, people who grew into awareness of a big and dangerous world around us in the 1950s and early 60s, a gnawing question lurked at the back of consciousness: what if we'd been Germans (or Americans) during the rise of Hitler? Would we have recognized the expanding barbarism that led eventually to the killing of 30 million Europeans? What would we have done?

Erik Larson's In the Garden of the Beasts: Love, Terror and an American Family in Hitler's Berlin is the story of one contemporary family that lived the question. William E. Dodd was not President Franklin Roosevelt's first choice to represent the U.S. in Berlin. In fact, the president had trouble finding anyone who wanted the job in 1933 just as Hitler took power. He finally settled on Dodd, an historian and a good New Deal Democrat, but not a conventional diplomat in a time when the State Department was still the bailiwick of men with propertied, inherited privilege. His tenure was never easy. The bureaucrats he reported to cared only about whether Germany might ever repay its World War I debts (it wouldn't). The Germans, rapidly being violently and only partially voluntarily Nazified, didn't have much truck with a mild small "d" democrat who had studied in their country in a more peaceful era. Dodd and his family never fit.

Larsen's book draws from the extensive record left in letters and other writings by Dodd himself and his flibbertigibbet daughter Martha. The other members of the family apparently left less record and remain vague presences in the narrative. Martha's life was a series of overlapping romantic encounters with attractive men; she did eventually figure out that the head of the Berlin Gestapo was not a nice beau. The Ambassador seems to have been befuddled by living inside fascism tightening its grip, though he comes across as a person of principle overwhelmed by his own powerlessness.

Shortly after the family arrived in Hitler's Germany, it's young members visited Nuremberg and encountered a sort of parade. The story is recounted though the memories of Quentin Reynolds, a reporter friend of Martha and her brother Bill.

From a distance they heard the coarse, intensifying clamor of a still larger and more raucous crowd approaching on the street. They heard distant music, a street band, all brass and noise. The crowd pressed inward in happy anticipation, Reynolds wrote. "We could hear the roar of the crowd three blocks away, a laughing roar that swelled toward us with the music." The noise grew, accompanied by a shimmery tangerine glow that fluttered on the facades of buildings.

Moments later the marchers came into view, a column of SA men in brown uniforms carrying torches and banners. "Storm Troopers," Reynolds noted. ... Immediately behind the host squad there followed two very large troopers, and between them a much smaller human captive, though Reynolds could not at first tell whether it was a man or a woman. The troopers were "half-supporting, half-dragging" the figure along the street. "Its head had been clipped bald," Reynolds wrote, "and face and head had been coated with white powder." Martha described the face as having "the color of diluted absinthe." They edged closer, as did the crowd around them, and now Reynolds and Martha saw that the figure was a young woman -- though Reynolds still was not completely certain. "Even though the figure wore a skirt, it might have been a man dressed as a clown," Reynolds wrote. "The crowd around me roared at the spectacle of this figure being dragged along."

The genial Nurembergers around them became transformed and taunted and insulted the woman. The troopers at her sides abruptly lifted her to her full height, revealing a placard hung around her neck. Coarse laughter rose from all around. Martha, Bill, and Reynolds deployed their halting German to ask other bystanders what was happening and learned in fragments that the girl had been associating with a Jewish man. As best Martha could gather, the placard said, "I HAVE OFFERED MYSELF TO A JEW."

Incredibly, this vicious display of racism and woman-hatred was not enough to disabuse Martha of her enthusiasm for the energy and apparent romance of the Nazi project of reviving Germany. She enjoyed collecting male admirers including the Gestapo boyfriend and a minor Russian diplomat who was also an NKVD agent assigned to attract her to Communism. But gradually the Dodds came to understand they had dropped into a society where suspicion and terror were omnipresent -- where everyone lived in a state of "ambient anxiety." They had no difficulty finding a magnificent house in Berlin to rent, because its Jewish owner had been forced to flee. They learned that if they wanted to be confident that no spy was listening they could only speak freely in the park, the Tiergarten, the "garden of the beasts" of the title. Dodd found that much of his work consisted of protesting attacks on U.S. citizens who had been inadequately enthusiastic about Hitler and were beaten by Storm Troopers.

Larson struggles to convey the incredible reversal of civilization that was the Nazi state. He draws on the understanding of a wise contemporary. Maintaining a state of constant fear of unspecified threats is a very effective means of controlling a people.

Even the language used by Hitler and party officials was weirdly inverted. The term "fanatical" became a positive trait. Suddenly it connoted what philologist Victor Klemperer, a Jewish resident of Berlin, described as a "happy mix of courage and fervent devotion." Nazi-controlled newspapers reported an endless succession of "fanatical vows" and "fanatical declarations" and "fanatical beliefs," all good things. Goring was described as a "fanatical animal lover." ….

Klemperer detected a certain "hysteria of language" in the new flood of decrees, alarms, and intimidation --"This perpetual threatening with the death penalty" -- and in strange, inexplicable episodes of paranoid excess … In all this Klemperer saw a deliberate effort to generate a kind of daily suspense, "copied from American cinema and thrillers," that helped keep people in line. He also gauged it to be a manifestation of insecurity among those in power. … Klemperer was struck by the fact that although Hitler was trying to convey omnipotence, he appeared to be in a wild, uncontrolled rage, which paradoxically had the effect of undermining his boasts that the new Reich would last a thousand years and that all his enemies would be annihilated.

It took "the Röhm purge" -- the convulsion in 1934 when Hitler's S.S. goons massacred the thugs who had served as muscle to put him in office and also some number of additional "enemies" -- to convince Ambassador Dodd that the Nazi regime was wholly evil.

For Dodd, diplomat by accident, not demeanor, the whole thing was utterly appalling. He was a scholar and Jeffersonian democrat, a farmer who loved history and the old Germany in which he had studied as a young man. Now there was official murder on a terrifying scale. Dodd's friends and acquaintances, people who had been to his house for dinner and tea, had been shot dead. Nothing in Dodd's past had prepared him for this. It brought to the fore with more acuity than ever his doubts about whether he could achieve anything as ambassador. If he could not, what then was the point of remaining in Berlin …

He didn't long remain; the mandarins in the State Department wanted a more conventional diplomat in the job -- someone with enough personal wealth to put on a display, someone willing to ignore the Nazi regime's horrors in the hope of mollifying the bankers. Dodd came home and broke his health touring the country, struggling to overcome the strong isolationist sentiment that the United States should ignore these faraway European upheavals. (I think that my mother, who greatly feared the rise of the Nazis, attended his speaking events in the late 1930s.)

In the Garden of the Beasts is a gripping tale, a successful effort to transport readers into a terrible time and place. My greatest quarrel with it is that that other histories of the period (for example, Shirer's) suggest that the U.S. simply didn't loom very large in Nazi calculations; Hitler thought us a decadent, racially-mixed society that couldn't matter much. Inevitably in telling the story through the eyes of a U.S. diplomat and his family, their doings in Berlin come to seem more significant than they may actually have been. But this is a haunting book, one that immerses the reader more deeply than most of us are likely to want in the impending horror; highly recommended.