Every once in a while judges demonstrate a regard for the quaint idea that people in this country ought not to have to worry that government officers will restrain them without legal process. 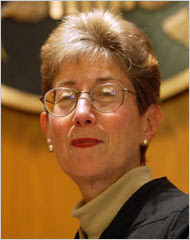 In New York, Federal District Court Judge Shira A. Scheindlin doesn't think the police ought to be free to stop and frisk people (mostly Black and Brown people) on the street without any cause -- except possibly to meet quotas set by NYPD brass. According to the New York Times, it was recently revealed in court that cops had made 200,000 such stops in the first quarter of 2012.

The judge said the evidence presented in the case showed that the department had a “policy of establishing performance standards and demanding increased levels of stops and frisks” that has led to an exponential growth in the number of stops.

But the judge used her strongest language in condemning the city’s position that a court-ordered injunction banning the stop-and-frisk practice would represent “judicial intrusion” and could not “guarantee that suspicionless stops would never occur or would only occur in a certain percentage of encounters.”

Judge Scheindlin said the city’s attitude was “cavalier,” and added that “suspicionless stops should never occur.”

She certified a class action lawsuit on behalf of everyone not charged with a crime who had been so stopped.
***

Meanwhile Federal District Judge Katherine Forrest blocked enforcement of the so-called "Homeland Battlefield" provisions allowing indefinite military detention without any legal process that Congress slipped into a recent extension of the post-9/11 law authorizing the "war on terror." She agreed with a group of civil liberties activists that the government should not be granted unreviewable authority to hold people indefinitely without trial.

During day-long oral arguments in March, Forrest heard lawyers for former New York Times war correspondent and Pulitzer Prize winner Chris Hedges and others argue that the law would have a "chilling effect" on their work.

"Can Hedges and others be detained for contacting al Qaeda or the Taliban as reporters?" Forrest asked the government at the hearing.

The judge said she worried at the government's reluctance at the March hearing to specify whether examples of the plaintiffs' activities - such as aiding the anti-secrecy website WikiLeaks in the case of Brigitta Jonsdottir, a member of parliament in Iceland - would fall under the scope of the provision.

"Failure to be able to make such a representation... requires the court to assume that, in fact, the government takes the position that a wide swath of expressive and associational conduct is in fact encompassed by [the law's section] 1021," the judge wrote.

It's good to know that at least one of our judges thinks it is time to resurrect the respect for due process and personal liberty to which, before a gaggle of terrorists scared the country out of its wits, we at least paid lip service. Should this country ever regain an even keel, we are going to look back in great shame the way we acted like scared rabbits while trashing the rule of law. For the moment, I don't have much hope these decisions will survive appeals, but they set a better standard than we've seen in such cases recently.
Posted by janinsanfran at 5:30 AM