Saturday scenes and scenery: Tech boom passes through the Mission

Employment numbers in the rest of the country may remain below par, but here in northern California and San Francisco we're again seeing a tech boom. Some of it consists of big tech companies extorting tax breaks and moving into the city's half vacant midtown; the city is still full of empty office space left over from the late 1990s tech bust.

But out here in the Mission, the health of the tech sector manifests as a new wave of young workers moving into our (relatively) cheap housing, enjoying restaurants and bars, and generally making the neighborhood their home, to some distress from long time residents.

Tech companies have set up private bus systems to transport their work force to Silicon Valley. 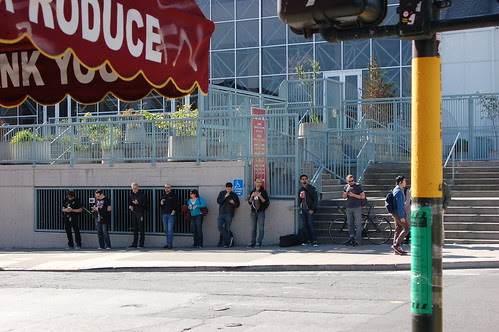 Every morning, the techsters line up for their rides. 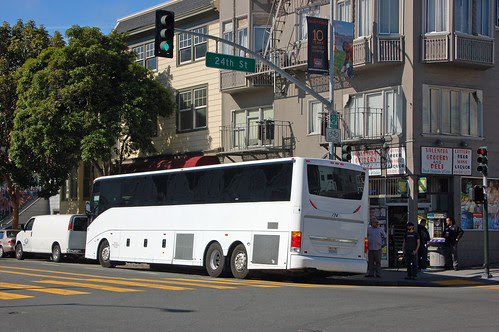 These double deckers with wifi and bike racks seem a bit out of scale for the neighborhood. 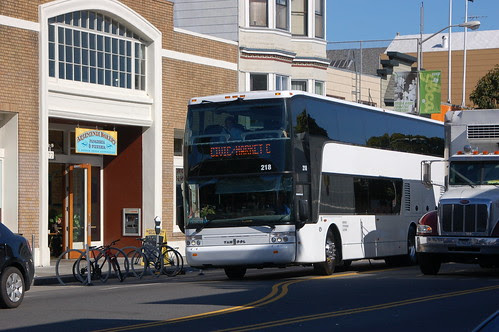 But they are sure beat the city's lumbering Muni bus transit system for comfort and reliability. I wonder, as the tech industry matures, will the companies slough off the expense onto the public sector? There are future conundrums presaged by what now looks like a cushy arrangement. 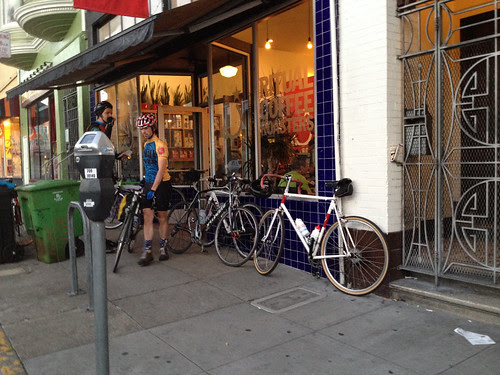 Some of the techsters are more ambitious, stopping by Ritual Coffee to fuel up before peddling in a group the 20 miles south.

It's easy to be resentful of our latest set of new neighbors; they move in, oblivious to the life that went before, bringing new money and new life patterns. They are far more likely to be white than the last wave of Mexican and Central American immigrants. And they have money to spend, a development that sets the terrain, for good and ill, for us all.

But hey, this is a city! Living cities change and grow. And even techsters age and grow up. Hippies and queers did. Well, mostly.
Posted by janinsanfran at 7:59 AM

Yeah, I'm one of those hippies who never grew up, and now I'm seventy. How did that happen? The Summer of Love was a long time ago...

It's a good reminder that reinventing oneself now and then is the best way not to get stuck in a dull rut, and it helps keep the world around you lively and amusing.

It's never quite clear whether I grew up, but I keep chugging along. Life is simply interesting ...