On Sunday afternoon, the San Francisco Bay Area experienced a partial solar eclipse. According to the Chron,

At 6:33 p.m., roughly 84 percent of the sun was covered by a new moon, spreading a strange light over most of the Bay Area. 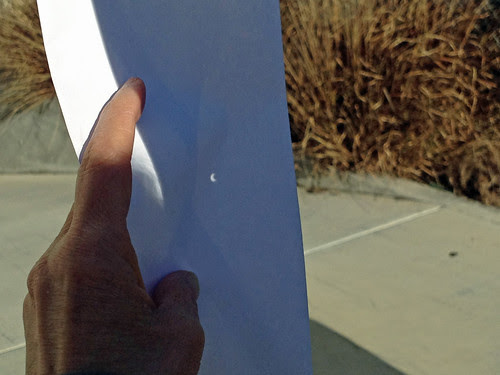 We viewed the partially obscured sun carefully, projecting the shape through a pin hole onto a piece of paper. The sun remained far too bright to risk direct viewing, even through sun glasses. 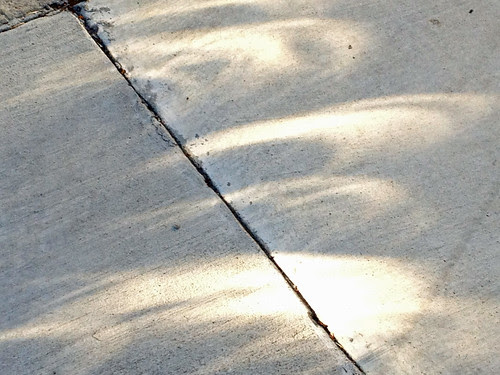 But it wasn't necessary to catch the sun's image to appreciate the strangeness of a diminished sun. A glance at the shadows on pavement would do. 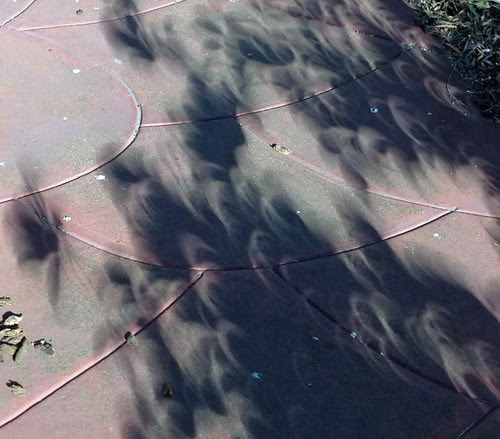 Tree leaves waving in the breeze cast strange crescent shapes.
***
I was reminded of the dystopian Mark Twain novel, A Connecticut Yankee in King Arthur's Court, in which a 19th century time traveler makes himself the ruler of Arthur's kingdom by pretending to bring on an eclipse (he remembered its history) just as the magician Merlin was about to have this scientific competitor from the future burned alive.

… a man knelt down at my feet with a blazing torch; the multitude strained forward, gazing, and parting slightly from their seats without knowing it; the monk raised his hands above my head, and his eyes toward the blue sky, and began some words in Latin; in this attitude he droned on and on, a little while, and then stopped. I waited two or three moments; then looked up; he was standing there petrified. With a common impulse the multitude rose slowly up and stared into the sky. I followed their eyes, as sure as guns, there was my eclipse beginning! The life went boiling through my veins; I was a new man! The rim of black spread slowly into the sun's disk ...

The darkness was steadily growing, the people becoming more and more distressed....

But when the silver rim of the sun pushed itself out, a moment or two later, the assemblage broke loose with a vast shout and came pouring down like a deluge to smother me with blessings and gratitude ...

That strange light did evoke magical awe, even on an ordinary Sunday in San Francisco.