Warming Wednesdays: where there's a will, there can be a way 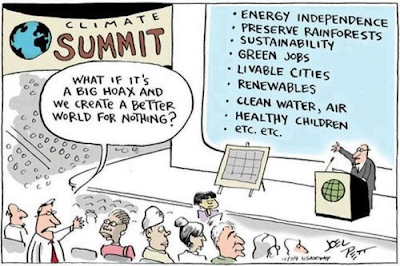 Juan Cole wants to remind us that some countries are making progress on reducing their carbon emissions to stave off the worst of human-induced global warming.

… there are responsible countries, like Germany and Portugal, who are investing in renewables in a big way.

On last Friday afternoon, because of clear skies and good weather, Germany was at one point producing 22 gigawatts of solar power, a new record. Today [Monday, May 28] is a holiday in Germany, and electricity needs will be only a third of normal. So, for a couple hours this afternoon, all Germany’s electrical power needs will be supplied by renewable energy. That must be a first for an industrialized, G8 country.

Germany has defied the predictions of those who said that mothballing its nuclear plants would cause it to produce more CO2. Its carbon dioxide production was down 2% in the past year. It replaced 60% of its formerly nuclear-generated electricity production with renewables, and became 5% more efficient in using energy. ...

Japanese firms, with the Fukushima nuclear disaster/tsunami in mind, are going into solar energy in a big way. Kyocera is planning the world’s largest solar power farm in the south of the country, which will generate 70 megawatts. If Japanese technical innovation and scientific ingenuity is turned, as it seems like to be, to renewable energy, they may well rejuvenate their lagging economy and become a big player in the burgeoning solar and wind turbine markets. The Japanese public has turned against nuclear pretty decisively, as have most companies there.

In China, the urgency of raising peasant masses out of enduring, terrible poverty turns the country toward coal and growing emissions.

But in the United States, progress on averting climate change is stymied by political gridlock and lack of will. Our inheritors will marvel at our folly.