A contemporary crisis of authority 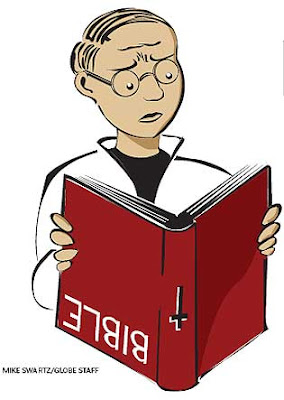 Franklin Graham, the vituperative son of evangelist Billy Graham, is sure that, by declaring he'd come to believe that marriage equality for gay people could be in accord with his Christian faith, the President is throwing down on the side of evil. Graham is certain he knows the mind of God.

President Obama has, in my view, shaken his fist at the same God who created and defined marriage. It grieves me that our president would now affirm same-sex marriage, though I believe it grieves God even more.

I found it interesting to read that denunciation in the context of some observations from comparative religion scholar Stephen Prothero.

As Mark Noll argues in his book America’s God, the fact that the Bible seemed to most "commonsense" readers to support slavery brought on a crisis of authority that helped to produce what we now [call] liberal Protestantism. Many American Christians [in the 1800s] just knew slavery was wrong, so they learned to read the Bible in a different way.

We may be at a similar inflection point today. If you take a literal approach to the Biblical books and focus only at passages on sexuality, the Bible seems to support Graham. But if you focus on its broader message of love, it casts its vote for Obama.

As with slavery in the nineteenth century, public opinion in the twenty-first century is shifting rapidly on the gay marriage question, and not only among secular types. Billy Graham and other evangelicals who continue to insist that “the Bible is clear” in its opposition to gay marriage would do well to heed the lessons of America's most costly conflagration over race.

As they preach what they see as the "clear" meaning of scripture, they are not only swimming against the tide of history. They are putting their own religious tradition at risk.

Marriage equality is coming. Even the right knows this; except when performing ritual obeisance at Liberty University, Mitt Romney has downplayed gay marriage as a campaign issue. But do religious leaders understand how they are giving that which they claim to love a bad name?

It's not just the evangelicals. Do Catholic bishops and Mormon elders understand how choosing literalism over the Golden Rule makes them seem simply bigoted cranks? Religious understanding will evolve; it has before. But how many generations will equate the instinct humans have that there is something more -- an instinct we have named "God" and in some traditions "Jesus" -- with ignorance and intolerance?

As a renegade Catholic, I'll be interested to see what the Church does with this.

Maybe I'll ask my priest what he thinks. He's pretty practical and lives in the real world.