Garbage and other election matters

My ballot has turned up in the mail (I'm a permanent vote-by-mail type) so there must be an election coming up. Around here, you'd hardly know it except for some random billboards telling us "No on A." And these attachments on the garbage cans. 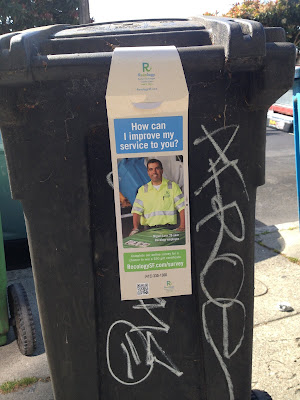 No, there's no presidential primary any more (not that this Democratic town cares) nor any very interesting propositions. But there's the matter of garbage. Or rather, who gets paid to get rid of it. On this topic there's the usual waste of trees, multiple glossy campaign mailers. And twice over the last six months I've been polled about my attitudes to the garbage company -- the former "Sunset Scavenger" which apparently hired a branding company and mutated into "Recology."

Garbage is a long standing conundrum in San Francisco. By law, all residents are required to pay a private company for garbage service and the company was designated in perpetuity in the city charter of 1932 with no provision for review or competitive bidding. This seems like a cushy arrangement.

On the other hand, we have some of the most effective recycling and waste reduction in the country and rates that don't seem exorbitant for the level of service. Mostly our garbage system works. Who wants to think about how to organize municipal garbage?

When polled, I had no idea what I thought about "Recology." (I just can't use the name without the quotes; it is as bad as "tall" for a standard small coffee.) I didn't trust the company particularly, but I didn't trust any of the messages they were testing on me either. How do I know whether changing the garbage service provider would give us better service? I kept telling them I'd vote based on who the proponent was and which politicians lined up for and against it.

Well, it turns out the proponent is one of San Francisco politics' notorious curmudgeons, retired judge Quentin Kopp. An elected supervisor in the 70s and 80s, he was notable for having trouble uttering the word "gay" just when our community was getting some political traction. And the opponents of the garbage measure, Prop. A, run the gamut from leftish Assemblyman Tom Ammiano through the Chamber of Commerce.

Guess I don't have to understand garbage. I can just vote against Prop. A and leave the system in the hands of the ever-so friendly (these days) "Recology."
***
As for the other stuff, here's how I'm voting:
Prop. 28 -- a minor improvement to the state's dumb legislature term limits: YES
Prop. 29 -- tobacco tax: yes

San Francisco Prop. B -- advisory measure about Coit Tower: yes I guess. (Why do we have to vote on these things?)

Democratic County Central Committee: this always reminds me of voting for student council in grade school. The winners will decide who gets the Party nod in supervisorial elections in the fall. It looks to me as if the "moderates," who are actually big business shills, will win this round. On this one, it is probably worth reading the Bay Guardian though several of their endorsements go to people I'll never vote for (that's you Leslie Katz!)

I wonder if June 5 election turnout will exceed 30 percent?
Posted by janinsanfran at 5:30 AM

The San Francisco garbage company is/was local organized crime from a specific region in Italy when the original lifetime contracts were signed and sealed with the city. They continue to be so to this day, but as you point out, they give good service and it's probably better than larger, national interests out of Texas taking over.

Quentin Kopp was always the reactionary right-winger to all that was good and leftist back in the day, but he also had/has a lot of integrity and discomfort with gay people was never one of his problems. I remember when Harvey Milk was running for something and the entire Democratic machine establishment, including the gay ones, were opposing him, and Quentin Kopp was one of his few public supporters from the establishment. I remember running into Kopp in gay bars in the Castro during campaigns, and he was cool.

As far as the Coit Tower thing, definitely yes. More local control of money and not the general maw of Rec & Park is a good thing.