A couple of political journalists, Joe Mathews and Mark Paul have made a stab at describing what's wrong with the political system of the Golden State and what might be done about it in California Crackup: How Reform Broke the Golden State and How We Can Fix It. I found their description very cogent, but their prescriptions just another mess of gimmickry mixed with a stew of unrealizable ideas.

Here's a short summary of these authors' understanding of what's wrong with California:

[An] extraterrestrial would see that California is governed not by one system but by three.

On the one hand, he would see a system of single-member legislative districts elected by plurality. This structure is well known to restrict representation to the two major parties, exaggerate the majority party's strength, empower the ideological bases in each party, and render the votes of millions of Californians essentially moot in most legislative elections. The system's driving principle? Create a majority and let it rule.

On the other hand, he would see, superimposed on the first system, a second political system: a constitutional web of rules requiring supermajority legislative agreement about the very subjects -- spending and taxes -- over which the parties and the electorate are most polarized. The driving principle of this second system? Do nothing important without broad consensus. In practice, let the minority rule.

And then on third hand (here's where you need an extraterrestrial Tocqueville), he would see that, in response to gridlock, voters have repeatedly used the initiative process, another majoritarian institution, to override the consensus principle, which was itself put in place to check the majority-rule principle. …

Good summary and the rest is amplification: our unrealistic limitations on the power to tax, coupled with our ever expanding demand for state services; our almost inadvertent sabotage of local government when we moved both budgeting and school funding to the state capital; the super-majority requirements which allow one third plus one member of one house of the legislature to dictate to the majority; the legislative term limits that destroy any vestige of political competence or policy expertise; the initiative industry that repeatedly saddles the state with poorly drafted laws that cannot be amended; and a state so large that its component communities have few shared values or even points of reference. 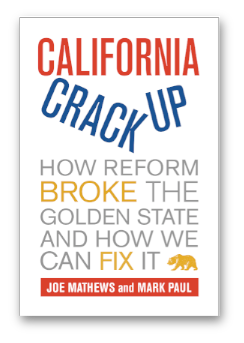 I believe that the last item is the fundament from which all the rest arises -- that what's wrong with contemporary California is that we have not come to terms with differences that we categorize as race. Some of those differences might more accurately be characterized as ethnicities, or home language usage, or immigration status. But the fact remains that there are not at present any values upon which most of us agree.

In particular, the dwindling fraction of our population that is white -- and still constitutes most of the electorate -- often refuses to recognize any social contract with the majority of color. So some of them -- not all white Californians by any means -- have captured the Republican party and use it to stamp their feet, refuse to be taxed for the benefit of all, and impede development of a new social contract more in accord with the needs and values of the current population.

California Crackup barely mentions the state's racial diversity. Come on guys, there is an elephant in the living room! By failing to take race into account, these writers undermine any serious credibility with me -- an undermining that was completed by their advocacy of such non-solutions as proportional representation, instant run off voting and even a constitutional convention. What California needs is not structural contrivances.

Rather, what we need is a functioning democracy. To get there, we need a new value consensus that is capable of assembling a relatively stable plurality, even a majority. When, and as, we approach envisioning such a consensus -- and living out our demographic changes carries us ever closer -- we'll figure out how to achieve structural reform.
Posted by janinsanfran at 6:00 AM