Political scientists tell us it's all about the economy -- and they are not all wrong. But there's a force they sometimes are not watching that underlies all that. This chart, yanked from electionate, says most of what we need to know about the upcoming election and the future of the country. 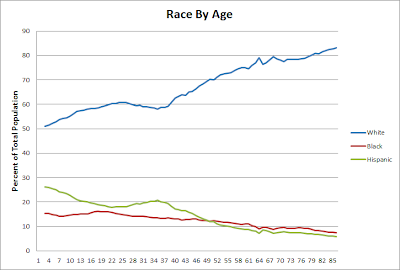 In every successive year, the proportion of us who are not white becomes greater while white majorities recede. See the red and green lines go up at the lower ages, while the blue line goes down. And every permutation of our society and politics can and should be viewed through that reality. Just a few: Okay, so Obama's personal prospects and those of the Democratic party look good -- getting better over the medium term -- thanks demographic shifts. But aren't some elements in the new majority actually socially conservative? Won't some of the new folks eventually, like Obama, succeed in the U.S. crony capitalist system? And won't they then shift to the party with the firmer allegiance to the plutocracy?

I often say ruefully that the sign of a successful civil rights movement is that the emerging group splinters into its class components. I say this as a gay person, a lesbian who has lived amidst pretty much the entire struggle for our full inclusion in the national polity from weak beginnings through to the beginning of the end of the process. Compared to groups whose source of exclusion from the country's goods has been race, we've trod a relatively easy road. I live in a city where no one doubts the political power of the LGBT community. Our fight is nearly over; though we may lose (or not!) a vote on our civil rights in North Carolina next Tuesday, openly gay people are being fully incorporated into the nation's life. You'd think we'd begin to splinter along economic fractures -- and there are plenty of such class lines in the gay community.

But we can't nearly to the degree that would be expected, so long as Republicans continue to pull stunts like the one the Romney campaign accomplished recently. They hired an openly gay "foreign policy spokesman" with impeccable credentials who had been a flack for the neocon Bush-era UN ambassador John Bolton. Then they responded to conservative pushback over his orientation by insisting Rick Grennell shut up during briefings he had organized. Naturally he quit or was dumped. Dumb and dumber.

Unless Republicans stop repeating such belly flops of bigotry -- and their bigotry is far stronger against non-whites than against white men who have sex "wrong" -- they can forget attracting significant numbers of the new majority.

Political progress is not linear. There will be ups and downs. But that chart at the head of this post is remarkably linear. For all of us, the message is "deal with it!"

Posted by janinsanfran at 12:14 PM