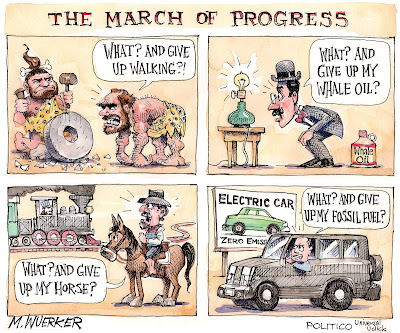 Paul Krugman, the New York Times columnist, is known for worrying -- and for calling out people who he thinks are doing things wrong. At the moment he's on a frenetic book tour, explaining to audiences how blinkered economists and timid public officials have gotten the contemporary Depression wrong.

Ezra Klein seized the opportunity of the tour to ask him what else we should be concerned about:

Let’s step back for a moment. What do you think we should be worrying about in 10 years?
I really think 10 years from now the signs that we’re on a runaway climate change will start to become a lot more obvious. It won’t be big rises in temperature yet, but will be enough to make people look around and say, oh my God. But by then, it will be very hard to bring it under control.

Are you a technological optimist on this?
Well, there are different kinds of technological optimists. One kind of technological optimist says we’ll spontaneously develop technologies that give us perfectly clean energy. I think so long as fossil fuels are cheap, people will use them and it will postpone a movement towards new technologies. And then there’s geoengineering, which we may eventually use out of desperation, but is full of unintended consequences and political questions. That won’t affect all countries equally. It will hurt some countries and help others. It would be a helluva thing to throw into the global situation.

I’m a technological optimist in that I think if we had appropriate pricing, we’d find it remarkably easy. The cost of getting out of rising emissions would be much lower than legend has it. But I’m not politically optimistic that we’ll do that.

So you’re an economics optimist. You think if we got the price right, we could get the technology right.
Yes. But it’s scary stuff.

We'd be nuts not to be frightened by the tsunami of changes that our manipulation of the environment has sent barreling towards us. But Bill Blakemore has offered a prescription for moving beyond terror. Apparently the Air Force recognizes that in moments of emergency, flyers can freeze -- a kind of "brain lock." They teach pilots to "hug the monster" -- to learn to embrace that otherwise paralyzing fear so as to move beyond it. Applied to the recognition of global warming, "hugging the monster" has exciting implications.

…those who have also hugged this monster are finding that doing so transforms the crisis:

The whole thing is worth reading.

H/t to The Left Coaster for the Blakemore article.