A caring look at torture

None of Us Were Like This Before: American Soldiers and Torture by Joshua E.S. Phillips. 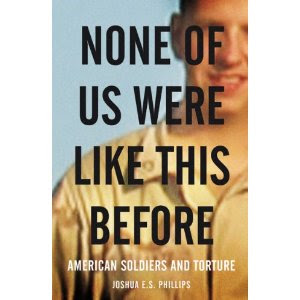 I found it hard to get into this book. It seemed a little incoherent, jumping from the fate of Sgt. Adam Gray, an Iraq Army vet who apparently killed himself after finding he could not reintegrate himself into civilian life, to a narrative of the Bush administration's (and the successor Obama regime's) growing enthusiasm for torturing people who it designated as enemies in the war on an adjective, to Phillip's efforts to get the victims of these policies to recount what had been done to them and the long term consequences.

Then I finally got it. Phillips cares. He cares about U.S. soldiers who, happily or grudgingly, did things to fellow human beings that will scar their humanity for life. He cares about miscellaneous Iraqis, Afghans and other designated Muslim "enemies" who suffered indignity, injury, and even, perhaps inadvertent, execution. He cares about what the gleeful brutality of U.S. policy does to our nation. Such a broad concern doesn't make for neat categories or neat organization.

But it did make for insights into the U.S. post 9/11 torture regime that I haven't seen so clearly spelled out in other sources. Phillips questions whether these horrors are really over under the new administration. Only ten U.S. personnel involved in "abuse" have been convicted and sentenced to as much as a year in prison.

And for many returned vets, the trauma doesn't go away. Jonathan Millantz' mother tries to put his suicide into some perspective.

"Their rage and the fact that they were given too much power, and the detainees were powerless, and the fact that there was no one protected them... that's how the abuses occurred," said Millantz's mother. "People might think, 'Oh, I would never do anything like that.' Wrong. It takes a very, very mature, moral, strong person to not abuse power... They are very young and they make very unwise choices, which they regret.

"And it is all for naught."

None of Us Were Like This Before is a very painful book. But even if the Obama administration refuses to "look backward" U.S. citizens must, if we are to have any kind of chance to look forward to a better future.
Posted by janinsanfran at 5:00 AM

Read the book, and also felt EXACTLY the same way. I wasn't sure about whether I'd get into it, and started to questions the structure. But in the end, just like the reviewer wrote, I thought the author did an amazing job of weaving together a bunch of highly illuminating disparate points. Two big thumbs up!

just spotted this review after reading the book. thought it was incredible. haven't read anything like it before. i hear you about the way it started out, but it actually worked for me. was wrapped until the last page. wish this book had a strong presence. it surely deserves one. liked your review very much.
peace,