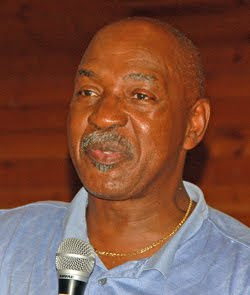 When Professor Charles Ogletree lectured last summer about his new book, The Presumption of Guilt: The Arrest of Henry Louis Gates, Jr. and Race, Class and Crime in America, I was an unconvinced listener.

Wasn't the subject matter a little thin? Yes, Professor Gates' brief arrest in Cambridge was a classic example of racial profiling. Obviously the Cambridge cop had a assumed a Black man had no business in Gates' upscale home. No less surprising was that Gates' class position and celebrity made the incident go away without many longterm repercussions. And equally obviously, President Obama had made a very rare mistake in his handling a race issue by responding candidly to a press question that the arresting officer "acted stupidly." On this topic, Obama saying the obvious had the effect of, in Ogletree's words, of "blackening" our so carefully non-racial President.

But a book about this stuff? I see poor Black men jacked up by police in my poor Latino neighborhood as often as once a week. Latino drunks on the street are sometimes ignored while the Black drunk gets stood up and his stash poured out. These scenes are a reality of urban life; what happened to Gates is unusual only because his prominence meant the world noticed this nasty little injustice.

But having just read Ogletree's book, I think my easy dismissal was partly wrong. The Harvard Law professor has done something different: he has collected stories of racial profiling from prominent, accomplished Black men and simply passes them on, four or five paragraphs each, over one hundred pages of text. These are people who, if they were white, would almost certainly never experience these kinds of routine humiliation that are so commonly visited on poor citizens. By themselves, each of these incidents is small -- collected together, they wear any thoughtful reader down. What would it be like to live with a niggling fear that something like this might happen at any time?

In this small way, Professor Ogletree's book "works."
Posted by janinsanfran at 8:34 AM

I'm white. I've had guns drawn on me by police, had my watch stolen by one, had one tell me repeatedly that (and the craziest thing is this was in some movie) I spit on his gun and to wipe it off while about 10 other cops stood around laughing, same guy threatened to take me and my girlfriend out into the woods, been handcuffed in a patrol car after being arrested for having gotten beat up and had the cop slam on the brakes over and over again, had handcuffs ratcheted down so tight I couldn't feel my hands for hours afterwards.

It's a poor thing. If it's a black thing, it is because they are more apt to be poor than whites. There is also the black/mexican stereotype that mexicans are workers whereas blacks are not, which amounts to just another poor thing. These men were mistaken for being poor.

So, this professor didn't even write anything, is that correct? I suppose he was taking heat for being non-productive and decided he could get away with typing up a bunch of anecdotes and passing it off as sociology. He is really actively lecturing about this?

No question DPirate, it's a poor thing -- and also simply an enforcing conventional norms thing. I get it too: all my life I've been followed by store detectives, because something about me "feels wrong" -- I'm a white, tall, butch lesbian. I've been stopped by cops on LA Skid Row -- because I was white and "didn't fit."

Professor Ogletree actually teaches and practices criminal defense law, not a lucrative part of legal work, so I think he gets some credit.