If anything good comes of 2010, it will be this 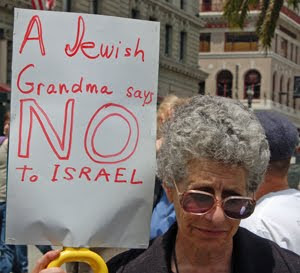 In 2011, there will be only one way to be pro-Israel. That is to join those who are fighting the occupation. Supporting the status quo, defending the occupation, opposing direct US intervention to establish borders and end the occupation, is, in effect, about as anti-Israel a position as it is possible to take.

Forty-three years too late, civilized people in the United States, including majorities of U.S. Jews, have stopped believing that Israel can be both a democracy and rule violently over a powerless subject people. It's no longer completely taboo to use the word "apartheid" to describe the occupation.

Will this do any good for Palestinians (and Israelis) on the ground? Hard to know, but this shift was a necessary precursor to any positive movement.
Posted by janinsanfran at 10:05 AM

too little too late. they should have started this a good 30 years ago.

i don't think the palestinians need the jewish americans anymore. we, the lebanese, did get rid of the israeli occupation and fought back another invasion in 2006 not only without the jewish-americans but without americans all together.

the only solution will be one state, secular democratic. it won't be easy but it will happen. :)