According to organizers, "On December 13th 2010, a few hundred people gathered [in Oakland] to protest a lobby for war and occupation."

Meanwhile, on BART station platforms [local mass transit] these days, there is this: 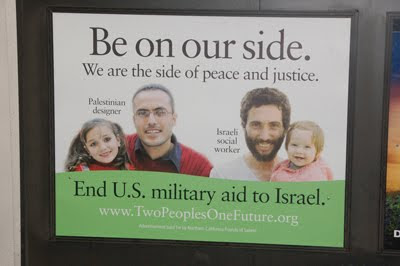 Israeli commentator Daniel Levy thinks the "peace game" is about to change, that The Palestinians Won This Round.

...Palestinian civil-society leaders and non-officials have already made [a] break and are pursuing a popular strategy which puts Palestinian freedom first (whether in a truly independent sovereign state of their own or in one shared state), that pushes for sanctions against Israel for its continued denial of their freedom, and pursues nonviolent struggle and protests in villages across the West Bank.

Making that transition will not be easy for those who the West recognizes as the official Palestinian address and interlocutor. That transition will not happen tomorrow, but it is fast becoming the most-likely game-changer in the foreseeable future. This trend was given a significant shot in the arm by the latest debacle of the rejected moratorium incentives deal and the way it exposed the naked lack of credibility of the existing peace process industry.

While a Palestinian strategic shift may be more likely, it will also be distinctly uncomfortable for Israel and would carry with it unwanted challenges and complications for the United States. It was Israel’s defense minister, Ehud Barak, who said earlier this year that if we don’t get two states then we get apartheid. If the Palestinians were to make that call, then could the United States afford to still stand four-square behind Israel and could it afford not to?

We all need some of that changy stuff. Maybe Palestinians can lead the way, with a little help from their friends.
Posted by janinsanfran at 4:21 PM