A little rant for any passing Republicans ...

Societies work when their members, collectively, rich and poor, recognize that there's no mommy to save them -- that people have to work together to build and retain social arrangements that enable everyone, more or less, to survive decently.

The GOP has become a political party whose purpose is to squash that truth -- a party whose sole object is to cut taxes for rich people and destroy collective (government) solutions to collective problems. They yearn for a world where everyone is on their own -- and all sink into misery unless they can buy private protection from each other.

Imagining what a society with no government and no tradition of collective responsibility might look like need not require any great mental stretch. I've just visited one. 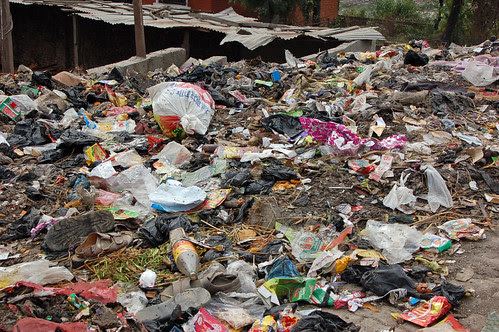 There is no garbage collection in Kathmandu, Nepal. You get this by the side of the road. Now Nepal is one of 10 poorest countries in the world, so some of the problem is poverty. Some thirty-seven percent of Nepalese live on less than $1 a day. But one of the realities of extreme poverty is that there are lots of people desperate for just about any work that would feed them. Couldn't some of them be paid to collect garbage?

Sure, if there were a government. But Nepal hasn't had even the pretense of one since last June. For many years it has been wracked by tensions arising from extreme economic inequality, leading to a Maoist insurgency in the countryside and political stalemate in the center. 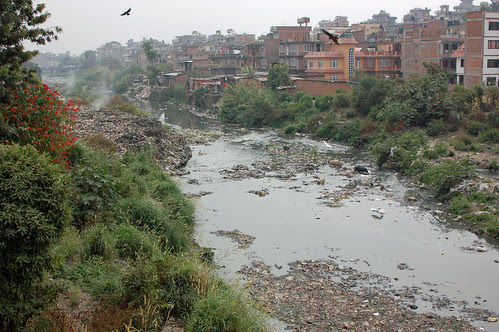 People dump their waste where they can. Rivers make good sewers, even though they also supply Kathmandu's water.

There are rich people in Nepal. They pay private guards and use the national army to protect themselves from the worst of the dirt, the garbage, and from personal insecurity. Some maintain the nation's Hindu/Buddhist culture insulates the wealthy from the consequences of their selfishness and from the anger of the poor. Karma, the residue of actions in past incarnations, is believed to control individual's fate. Dharma, the imperative to accept the status one is born into in life, short-circuits protest. Fatalism reigns. Republicans would like that for everyone else, right? 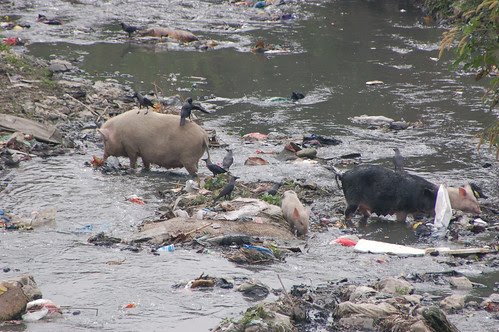 The river of garbage does provide an welcoming home for ravens and pigs. Republicans don't worry about things like that. They'll just buy up a piece of country, evict any farmers, and fence the place off from dirty peons. 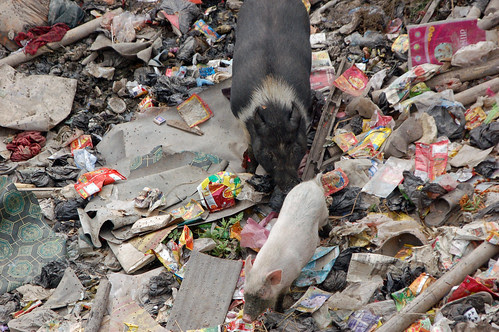 I don't want to live like this. There are people in my country who would drive us in this direction.There are a lot of people who have a happier vision. We struggle for a decent, generous, and confident country -- and we have a lot of work to do.

Even more than in my other Nepal posts, I would urge people to read my disclaimer about what a tourist can see.
Posted by janinsanfran at 4:13 PM

And your voice is so important in preventing this!
Mainline Protestantism keeps getting more and more relevant as it keeps growing.