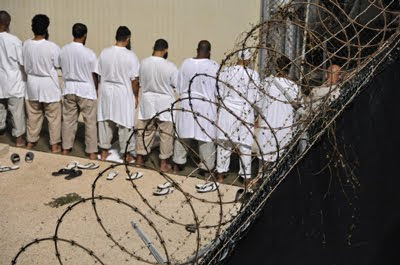 Carol Rosenburg has been reporting for the Miami Herald on the United States' Guantanamo gulag since January 2002. So, in a piece about improvements in the conditions under which the remaining 174 prisoners live, she drops the essential context setting statement into the 13th paragraph.

Military officials said they have consciously attempted to make Camp 6 feel more like a dorm and less like a SuperMax for the men, most held for eight years and all without charge or trial.

My emphasis. Think about that. Eight years, no process, no charges, no trial, just endless imprisonment by anxious, dangerous guards with no end to imagine.

One of the Wikileaks dump diplomatic documents reveals that two years ago, Secretary of State Hilary Clinton called Guantanamo: "a cancer the U.S. wanted to take care of."

Now much of cancer treatment is pretty primitive. But one principle is simple: if you find cancer, you cut it out. Guantanamo should also be simple. Excise it. Close it. Now. Don't dick around any further. If other countries won't take the men we've wronged, bring them here. Tell United States people who get queasy at the thought to grow up. It's a big dangerous world; there is no such thing as absolute safety. Just do it. You don't temporize about a cancer.
Posted by janinsanfran at 10:51 AM

Email ThisBlogThis!Share to TwitterShare to FacebookShare to Pinterest
Labels: rule of law, torture