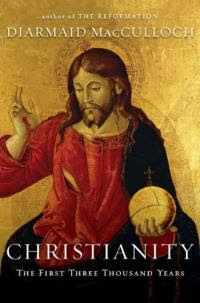 Diarmaid MacCulloch's Christianity: the First Three Thousand Years was unequivocally my favorite new reading discovery of 2010, but I've barely written about it here. It's just too big -- this enormous work of astonishing erudition surveys the complete history of the world's numerically largest faith.

For Western readers, MacCulloch is perhaps most interesting when he retrieves the experience of the Eastern churches, showing no particular bias toward any of the religion's variants. Yes, Christians often slaughtered their adversaries both within and without the faith (and were slaughtered themselves when they didn't have the upper hand).That's all there, but it is not MacCulloch's focus. Rather he recounts the numerous odd byways of faith with unfailing interest in and often delight at their sheer multiplicity.

I'll skip trying to say anything more in summary, but I did want to share one passage that I frequently recalled during my recent travel in Nepal.

Modern globalization has produced a dialogue between world religious faiths which in the last century or so has become something of an international industry. But this is a rediscovery for Christians and not a novelty: there were once Christianities which had little choice but to talk to believers in other world religions, because they were surrounded on all sides by them and often at their mercy. These Christians nevertheless traveled thousands of miles east of Jerusalem and brought a Christian message at least as far as the China Sea and the Indian Ocean. One of those encounters produced a tale which went on to unite Christians everywhere in enjoyment of it for something like a millennium, though it has almost been forgotten in the form which those Christians knew. It is nothing less than the story of Gautama Buddha, turned into a Christian novel about a hermit and a young prince, Barlaam and Josaphat. Barlaam converts the prince to the true faith, but that true faith is no longer Buddha's revelation, but Christianity -- while the Buddha has become a Christian hermit in the desert of Sinai, though his prince is still from a royal house of India.

How can this extraordinary cultural chameleon have been conceived? What seems to happened is that a version of the Sanskrit original life of Buddha, probably translated into Arabic in Baghdad, fell into the lands of a Georgian monk some time in the ninth century. He was so charmed by the story that he rewrote it in Georgian in Christian form as Balavariani, and fellow monks who spoke different languages also loved it and moved it into their own tongues. When it made its way into Greek, it took on a spurious authorship and plenty of pious quotations from the safely Orthodox giant of theology and philosophy John of Damascus to lend it respectability and increase its selling power, and now it was The Life of Barlaam and Joasaph. The two heroes became saints, with their own feast days, hymns and anthems. Small bony fragments of St Josaphat acquired in the East by Venetian merchants can be seen in a church in Antwerp.

The tale's travels had by no means ended. It spread from the Byzantine Empire through western Europe and south via Egypt: one could pick up copies of it in Latin, Hebrew, Old Norse, Old Russian, Ethiopia, medieval Catalan, Portuguese, Icelandic, Italian, French and English. The pioneering English printer William Caxton showed his usual commercial good sense when, in 1483, he chose to print it in his new translation of the great collection of saints' lives known as The Golden Legend, and Shakespeare used an episode from it in The Merchant of Venice. Perhaps we can appreciate just how far the Eastern Christian legacy eventually reached if we join the cultured English Roundhead military commander Thomas Fairfax, third Lord Fairfax of Cameron, in his Yorkshire study in the I650s. Smarting from the end of his military career after a principled quarrel with Oliver Cromwell, Fairfax pulled his Latin or Greek Barlaam from his bookshelves and whiled away his retirement with his own English translation, some 204 folio pages long. Puritan (and Chalcedonian) Yorkshire was a long way from the home of the Buddha, and Fairfax would have had no idea of his debt to that long-dead Georgian monk.

Expect other tidbits of MacCulloch to appear here as life jogs my memory of this remarkable historical tour de force.

Small statue of Buddha seen at Durbar Square, Patan, Kathmandu
Posted by janinsanfran at 5:00 AM