Once around the 10th Parallel, touching down lightly 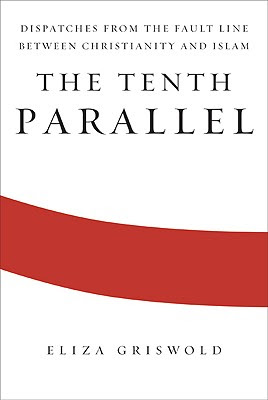 I took two thoughts away from Eliza Griswold's The Tenth Parallel: Dispatches from the Fault Line Between Christianity and Islam, neither deep, but perhaps not utterly inconsequential either.

One: There sure are a lot of fascinating and wacky religiosities in the strip of Africa (crossing Nigeria, southern Sudan, and Somalia) and Asia (Indonesia, Malaysia and the Philippines) that borders Latitude 10 degrees north of the equator. Most obviously, Christianity and Islam often live side by side here. That encounter becomes violent all too often as beliefs about how to encounter God become mixed with differences in ethnicity, language, and economic status and simple survival. This is most clearcut in her reports from the Sudan and the Philippines. But there's also plenty of violence within the two great religions between adherents who hold different interpretations of their own one true way.

But those stories are not the ones that gripped me; perhaps I've read too much about Christian-Muslim conflict elsewhere. Rather, I was fascinated and surprised by some of the oddities she encountered. There's Bishop David Oyedepo, a Nigerian Pentecostal preacher who presides over a megachurch called Canaanland with its own university. His thousands of followers proclaim to a prosperity gospel.

"There's a kind of revolution going on Africa," said Prince Famous lzedonmi, a professor at Covenant University. I met him in the college cafeteria, where he overheard me asking my... tour guide questions. The professor was a Muslim prince who converted to Christianity as a child to cure himself of migraine headaches. He was also the head of the university's Accounting and Taxation Department and director of its Center for Entrepreneurial Development Studies. "America tolerates God. Africa celebrates God. We're called 'the continent of darkness,' but that's when you appreciate the light. Jesus is the light."


When I asked how this came back to money, he clucked at me. "God isn't against wealth. Revelations talks about streets paved with gold. Look at how Jesus dressed," Since the soldiers cast lots for Christ's clothes, they were clearly expensive. In Canaanland, clothes matter: the pastors are flashily dressed and drive fast cars as a sign of God's favor. ...

Okay, I know that prosperity-oriented Christian groups also thrive in some communities in the U.S. But Griswold's next subject is the Nigerian Islamic counterpart of the same sort of faith; that comes to me as a bit of a surprise.

The Christian gospel of prosperity is so powerful it has spawned a unique Nigerian phenomenon: an Islamic organization called Nasrul-Lahi-il-Fathi (NASFAT). The name comes from a verse in the eighth chapter of the Quran, "The Spoils of War," or al-Anfal, and it reads, "There is no help except from Allah." The kind of help NASFAT offers begins very much with this world. The organization is based on economic empowerment and prosperity, with an Islamic spin. Started with about a dozen members in the 1990s, NASFAT now has 1.2 million members in Nigeria and branches in twenty-five other countries. ...NASFAT is not modeled after Islamic charities such as Egypt's Muslim Brotherhood, which provides Islamic-based social services to its clients and propagates a conservative form of Islam. It is the opposite: a way for Islam to engage with the West on its own terms. As splits within Christianity are shaping the future of the faith, so is splintering within Islam. Most conservatives loathe NASFAT and believe that this engagement with the secular world is haram, "forbidden," and distinctly un-Islamic. Yet faced with the encroachment of Christianity, NASFAT argues that the only way to survive in the religious marketplace is by playing the same game. ...


Gesturing to the streets choked with more than a hundred thousand men and women in white as they came from a prayer service at the Lagos Secretariat Mosque, he explained that NASFAT meets on Sundays so that Muslims have something to do while Christians attend church. "The space on Sunday is usually not dominated by Islam, but other faiths and other values. But when our people come here, they come and drink from the fountain of Islam."


...The prayer ground looked like a fairground -- just like the Pentecostal churches did. Everyone among the throngs of thousands was clad in white, and except for the women's eyelet head scarves and the men's small white hats, there would have been no way to tell if this was a gathering of Christians or Muslims. Hawkers sold lemons from a wheelbarrow. Small booths offered those pretty, scalloped hijabs, embroidered with "NASFAT' in blue. Men sat on prayer mats eating rice, while women attended a lecture on ways to make money in keeping with Islam. NASFAT's primary mission is to reclaim those values the world sees as Western but that its members perceive as integral to the success of the global Islamic community, the Ummah. Foremost is education. ...

Apparently the human impulse to make the temple a center of commerce finds expression in the most austere of faiths.

Two: That woman sure gets around! I was simply awed by Griswold's range -- to collect this material, she ventured into a myriad of situations where Western reporters seldom travel. And I was awed by her bravery. Lots of these places were deeply dangerous to their own residents and especially to foreign intruders. In most of them, she interviewed warriors -- overwhelmingly male warriors -- who define their battles as religious. Many of these men are not just aspirational killers. For this aging feminist, it's stunning to know we now live in a world in which a determined woman can do this work. Kudos to Griswold.

The book reads as if it had started life as series of magazine articles, which it almost certainly did. In consequence (and for lack of copy editing) there are annoying repetitions and a certain sense of skimming once over lightly among impossibly complex realities and people. (Griswold certainly gives every indication of knowing she has just touched surfaces.) But oh, what a tour! I live in a bigger world for having read it.
Posted by janinsanfran at 7:55 AM