U.S. vets talk about the AVF and their "service" 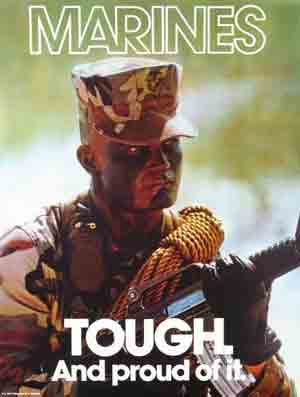 What's the AVF? It's the initials for the "All Volunteer Force," the present compostion of the United States military. Tom Ricks, former Washington Post military correspondent and current Foreign Policy blogger, has hosted a fascinating conversation among recent and current soldiers about what being part of such a military is like -- and what it does to the relationship between our soldiers and the country at large.

It used to be, until 1974, that if the country wanted to fight a war, it drafted a cross section of young men as soldiers. The system was never fair; privileged people could usually stay out of the fighting. But the big wars of the 20th century up through Vietnam drew in a pretty broad section of the population. Having experienced military service was almost a necessity for ambitious politicians, certifying their "man of the people" status. But since the draft was suspended, that's all changed. As a former Marine who calls himself "A. Scout-Sniper" explains:

The burden of fighting and sharing a war has shrunk to the point where 1 percent of our citizens and their families endure the permanent life-changing consequences of warfare.

He thinks that is wrong and calls for reinstatement of universal service. Some of the reasons he brings forward: These guys (I think the commenters are all men, though I could be wrong) aren't antiwar exactly, though they think their civilian bosses are doing a piss poor job of leading them and some think they may have done more harm than good for the country's interests in the theaters where they served. (In these suspicions, they are probably no different from many draftees in past wars if I have read my history accurately.) Most soldiers who have to do the actual fighting have a pretty low opinion of politicians and desk jockeys.

Mostly they feel out on a limb in a society that has no idea what their service has meant. One or two even wish there was more of an antiwar movement; that would show them someone noticed. David J. Morris writes

...no one at home gives a shit and as a result, the wars go on and on without any real sense of accountability. Ours is not to reason why seems to be the operative philosophy. And life in unbombed America goes on and on, as if nothing at all has happened, a horrific incongruity that leaves many veterans to wonder which is the more obscene: the wars or the public's shameful ignorance of them.

Precisely because only one percent of people in the United States are directly experiencing the country's Iraq and Afghanistan adventures, people who oppose these wars need to work at getting a glimmer about how they are experienced by the fighting forces. I've rearranged and excerpted in these posts. Go read the whole thing and do go on to follow up posts, here, here, and here.
Posted by janinsanfran at 12:24 PM