If you find yourself stuck in a hole, stop digging! 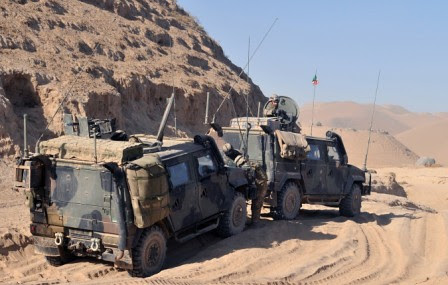 U.S. generals want to attack the bad guys in Pakistan, or so says the trial balloon in the New York Times.

WASHINGTON — Senior American military commanders in Afghanistan are pushing for an expanded campaign of Special Operations ground raids across the border into Pakistan’s tribal areas, a risky strategy reflecting the growing frustration with Pakistan’s efforts to root out militants there. ...

The proposal, described by American officials in Washington and Afghanistan, would escalate military activities inside Pakistan, where the movement of American forces has been largely prohibited because of fears of provoking a backlash. ...The decision to expand American military activity in Pakistan, which would almost certainly have to be approved by President Obama himself, would amount to the opening of a new front in the nine-year-old war, which has grown increasingly unpopular among Americans. It would run the risk of angering a Pakistani government that has been an uneasy ally in the war in Afghanistan, particularly if it leads to civilian casualties or highly public confrontations.

Still, one senior American officer said, “We’ve never been as close as we are now to getting the go-ahead to go across.”

Oh great. Anybody at the Army War College remember those "secret" wars in Cambodia and Laos and how well that turned out? No, I don't think they do.

As it happens, the reporter Anatol Lieven, who observed the defeat of Soviet forces in Afghanistan and its aftermath, has just written an essential discussion of why further destabilizing Pakistan is a likely result of the U.S. military's frustration -- and why this is a very bad idea.

It cannot be emphasized too strongly that the survival of Pakistan, not Afghanistan, is the most important issue for Western and global security in that region. With six times Afghanistan's population, plus nuclear weapons, a highly trained 500,000-man army and a huge diaspora (especially in Britain), Pakistan would increase the international terrorist threat by orders of magnitude if it collapsed. There is a widespread (though exaggerated) view in the West that the weakness of the Pakistani state and the strength of Islamist support makes the country's collapse a real possibility. Leaving aside the danger (as exposed by WikiLeaks) of nuclear materials and skills reaching terrorist groups, the disintegration of the Pakistani army, with its highly trained engineers and anti-aircraft forces, would vastly increase the "conventional" terrorist threat to India and the West.

It was therefore with horror that I recently heard that the diminished threat from Al Qaeda means that some Western security officials are suggesting that the West can afford to put much more pressure on Islamabad to attack Taliban strongholds in Pakistan's border region, even though this may lead to greater destabilization within Pakistan. This is lunatic reasoning.

The diminished power of Al Qaeda should be cause for the United States and NATO to find ways to withdraw from Afghanistan, not step up the fight against the Taliban -- since it was to fight Al Qaeda that we went there in the first place. ...

Unfortunately, the current US strategy is headed in the opposite direction from using Pakistan to broker a settlement, and toward an intensified fight against the Taliban and intensified pressure on Pakistan. Even worse, there are barely the rudiments of a Plan B if that strategy fails. If it proves impossible to strengthen the Afghan National Army sufficiently within the next two years, the options will be stark: either US forces will have to fight on in Afghanistan indefinitely or they will have to accept the probable loss of the south and east of the country and either unending civil war or de facto partition through bloody war rather than negotiated agreement.

Among other things, all these options will be bad for Pakistan, especially if India is drawn into much greater support for the anti-Taliban forces in Afghanistan. This would in effect lead to an Indo-Pakistani proxy war in Afghanistan.

Lieven argues convincingly that a continued misguided effort to exclude all the Taliban from any future role in Afghanistan is driving the U.S. war toward broadening the violence. An Indian-Pakistan war set up by blundering U.S. imperial arrogance would be a crime against humanity -- even though most of the humans who would die would be "just" Pakistanis and Indians. President Obama needs to rein in his generals. And to get him there, we need a reinvigorated peace movement.

Photo shows a disabled Italian military vehicles, part of NATO's forces in Afghanistan. According to ISAFmedia, "Soldiers had to secure the area and fend of insurgent attacks." (U.S. Air Force photo/Tech. Sgt. Kevin Wallace)
Posted by janinsanfran at 5:00 AM