Boston Globe columnist James Carroll began a column with this story of the Virgin of Guadalupe a couple of days ago:

NEARLY 500 years ago, near present-day Mexico City, an "Indio" peasant was startled by an apparition -- the vision of a woman who, speaking his Nahuatl language, identified herself as the Lady of Guadalupe. The woman addressed the man, called Juan Diego, as "my son." She instructed him to bring her message to the archbishop, but he protested, "I am just a back-frame" -- a hauler of loads. The woman said, "I have chosen you."

The Lady's words put me in mind of this photo from the streets of Kathmandu of a man delivering a bed frame, the old fashioned way. 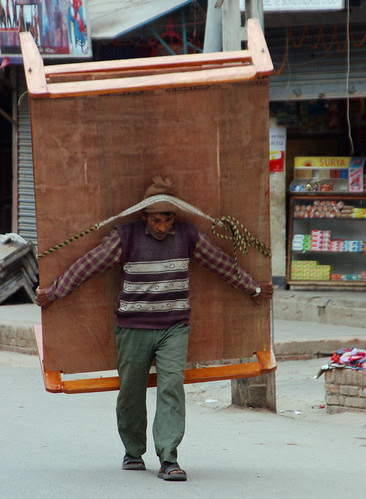 There are "back-frames" hauling loads all over the world, even as some of us fly across the continents and contemplate bullet trains. The story goes that, on December 12, 1531, the mere "back-frame" Juan Diego revealed the image of the Lady on his cloak to a startled Spanish bishop.

We do well to remember always the refrain from Psalm 9:18.

For the needy shall not always be forgotten: the hope of the poor shall not perish for ever.

It was the poor man, the nothing guy who didn't even speak the rulers' language, that the Lady called "son." Perhaps she is among us even now, but we don't look where she passes by.
***
Carroll's column is a commentary on how Mexico made peace and a new identity that melded Spanish conquerors and native conquered, while North Americans still wrestle with what our growing diversity of language and culture implies. Here are his conclusions:

In North America, the self-aggrandizing religious and cultural assumptions of the founding Anglo settlers were challenged by subsequent waves of New World immigration, but the structure of white, English-speaking supremacy was never dismantled. Speaking mythically, if the Blessed Mother were to appear in the United States today, she would be expected by the majority to speak English -- but would she? She would be expected, equally, to be white-skinned. That majority is shrinking.

Cultural intermingling is a fact of the new American condition, but many are upset by it -- especially because Mexicans represent the vanguard of change. Resisting that change -- which in the United States boils down to a final defeat of white supremacy -- means denigrating Mexicans as mere back-frames, and rejecting their language. This is the subtext of the US Senate's refusal, yet again, to take up comprehensive immigration reform, the long-promised creation of a path to citizenship for so many who already enrich this country.

Let us work and hope for the passage of a small immigration reform, the DREAM Act, in the befuddled U.S. Senate next week.
Posted by janinsanfran at 5:00 AM

I have had the honor of visiting Our Lady of Guadalupe's shrine and it truly is a holy place.

Thank you for reminding us that God chooses ordinary people like Juan Diego as his messenger. That's especially pertinent in this season in this season.