A peek into the new China 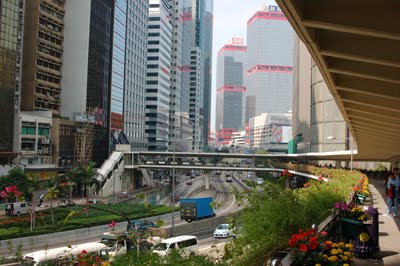 I haven't mentioned that we had lunch in downtown Hong Kong on the way to Nepal. It hardly seems worth mentioning. I learned about as much about China as a foreign visitor might learn about the U.S. by taking BART to downtown San Francisco from our airport, gulping lunch among the office workers, and jumping back on the train. Hong Kong is a big city; it's full of Chinese people apparently busily working; the air sucks, but so does most big city air anywhere in the world. 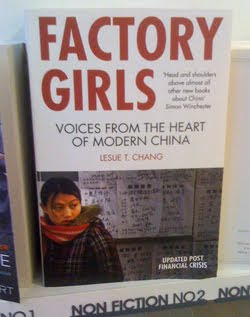 However, during our ensuing long layover at the airport, I noticed this title in the bookstore. I highly recommend Leslie Chang's Factory Girls: Voices from the Heart of Modern China to those who, like me, know that something enormous is occuring as China modernizes, but have difficulty imagining what the experience of that modernization might be like for the individuals living it.

Chang was a China correspondent for the Wall Street Journal for a decade; her Chinese-American family had left the country, first for Taiwan and then for the States, but she seems to have arrived in China with a command of the language.

And being a curious journalist, she set out to discover and record what was going on among one vital but hidden sector of that enormous churning country. Her subject is young women who "go out" from rural communities to make their fortune (and help their families' fortunes) in the southern industrial city of Dougguan. Dougguan sounds like the pits: dirty, full of anonymous dormitories, exploitative factories, and hucksters of all kinds. Yet for these industrial-worker migrants, this is also the land of opportunity -- and of freedom from the constraints of custom and family.

I kept being reminded of tales of the textile factories of early New England which similarly employed and exploited young women fresh off the farms, yet also gave a chance to ambitious women to enjoy a degree of individual autonomy they could not have otherwise imagined. That New England migration eventually created the context for the young country's early industrial labor protests and provided recruits for such social betterment causes as the anti-slavery and temperance movements.

Chang's young women aren't that sort of disturbers of the social order -- yet. She chronicles the horror of China's previous effort to overturn traditional society through what happened to her own relatives.

By the time Lijiao's [a relative's] children started elementary school, they already understood that their bloodlines were bad. ... China under Mao was an aristocracy in reverse: Pedigree had always been a national obsession, but now the higher a family's standing had once been, the worse off it became.

The Cultural Revolution, which began. in. the summer of 1966, completed this overthrow of the established order. For more than a century, Chinese leaders and thinkers had wrestled with how to fit their traditions into the modern world. The Cultural Revolution proposed a simple answer: Throw everything out. ... Education, long the mark of achievement and the path to mobility, was deemed "counterrevolutionary." The Cultural Revolution took everything the Chinese people had long held sacred and smashed it to pieces, like an antique vase hurled against the wall. It finished off the world of moral certainty and Confucian values into which my grandfather, and countless generations before him, had been born.

And what took its place? For a while, radical fervor was enough. But when the Cultural Revolution finally ended and pragmatic leaders like Deng Xiaoping took over, the Chinese would find themselves living in a vacuum -- stripped of all belief and blank as newborns, looking upon a ruined world they must somehow make anew.

This is the world in which the "factory girls" are finding new ways forward. The women with whom Chang became friends over a period of years are making their world anew, as surely as China's new capitalists are building the world's goods.

Nowhere does the radical change implicit in the success of this cohort of women show up more than in relation to their families. The un-nuanced reality is that their success as earners overturns the family order; she who buys the TV and the washing machine for her parents calls the tune. This extends to the most basic of the rites by which families reproduce themselves -- marriage. There's a lot up for grabs.

In traditional China, a young woman married into her husband's village, but usually it was close enough that she could go home to see her own family on occasion. Migration now made it possible for two people from towns a thousand miles apart to meet and marry. To a young woman's parents, that was a catastrophe: Unaccustomed to long-distance travel, they worried that a daughter who married a man from far away would virtually disappear from their lives.

When Min met a boy she liked, she made it a point to learn as little as possible about his origins. "Is your family poor?" she asked Ah Jie once. "Very poor," he answered. That was all she knew, and it was fine with her. "I don't want to know their family situation, and I don't want them to know mine," she told me. "In the end we must rely on ourselves."

Chang brings these young women to life. They are fascinating. I had no regrets whatsoever that I hadn't brought along a gripping novel for my trans-Pacific flight; this nonfiction book is as engrossing as any thriller.
Posted by janinsanfran at 4:30 AM