School Board member Sandra Fewer (l.) and the Rev. Deborah Lee of the United Church of Christ and Clergy and Laity United for Economic Justice sat on the panel along with other luminaries listening to community testimony. 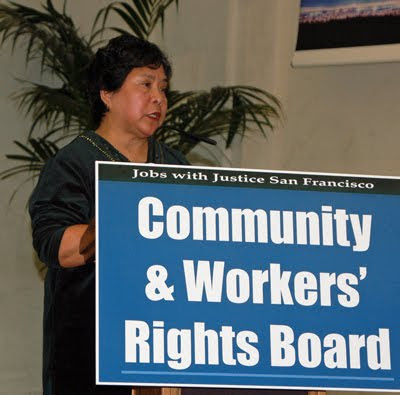 Siony Servillon, R.N., testified to CPMC's ongoing cut-backs at St. Luke's Hospital in the Mission where she has worked for 35 years. One service after another gets cut away, leaving the hospital less able to offer complete care to patients. 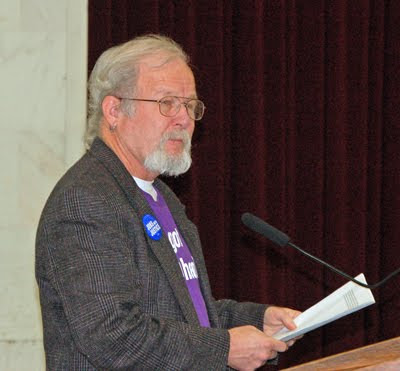 Ed Kinchley, a social worker at San Francisco General, the county public hospital, explained how CPMC's intent to move nearly all its activities to the center and north of town would shift more burden for caring for the poor to his workplace. He argued that CPMC might be offering to increase the St. Luke's Emergency Room, but since they were concurrently cutting back on acute care capacity, they'd just be sending the people they patched up over to the county. 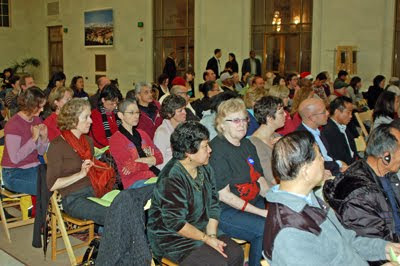 A good size audience listened to witness after witness. Martha H.Dominguez Glumaz described CPMC's refusal to consult with dialysis patients about a plan to sell off the service that keeps them alive. Ron Villanueva R.N., also from St. Luke's, testified that he had heard HR people from CPMC order supervisors not hire "foreign graduate nurses" -- like him. The hospital giant has long been charged with discriminating against Filipino personnel. Clifton Smith from the Community Housing Organizing Project wondered, if CPMC was going to build its huge project next to the Tenderloin neighborhood where he lives, would locals get any of the jobs?

The issue between the community and Sutter/CPMC is trust. The medical giant makes promises, but the people who work for it and the communities near it don't believe it anymore. They see CPMC rearranging its facilities to massage its own bottom line, not to provide health care for San Franciscans.

The power of monopoly medical systems -- integrated hospitals, doctor combines and various health facilities -- was barely mentioned in the recent national health insurance debate. If any of those policy wonks so enamored of the new legislation want to curb endlessly rising costs, these mega-institutions will have to be confronted. What happens with Sutter/CPMC in San Francisco is a test case of what a progressive municipality can get out of a hospital giant in return for allowing it to do business within its borders. We'll see.
Posted by janinsanfran at 5:00 AM