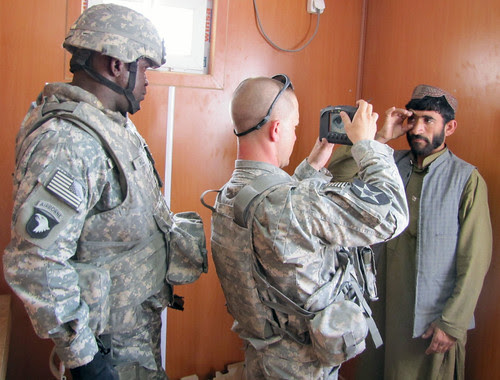 Soldiers demonstrate how they are using the Handheld Interagency Identity Detection Equipment (HIIDE) to gather biometric information on Afghans who cross through their checkpoint in the Arghandab Valley. ISAFmedia.

Today the Obama administration is apparently going to share its rationale for staying the course in its lost, useless war in Afghanistan. Not that anything good is happening there: But no -- under Obama any plan for an end date keeps receding. The Prez may promise some withdrawals by June 2011, but the military says the Afghan Army will need us through 2014 and maybe beyond.

Who's in charge here?
Posted by janinsanfran at 4:00 AM