Memorial Day: we remember our honored dead -- or do we? 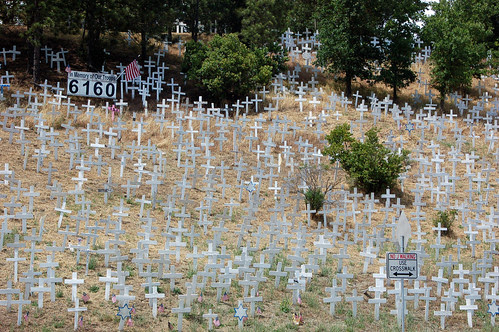 On a hillside overlooking Lafayette, California, citizens have planted markers for each of the U.S. casualties in Iraq and Afghanistan. The number of dead in the photo is badly out of date (the photo is from last June). Today the total troop deaths number 6470 according to iCasualties.

But those troop casualties aren't the entire story. According to the Defense (War) Department:

National statistics show that veterans constitute about 20 percent of the 30,000 to 32,000 U.S. deaths each year from suicide.

In fiscal year 2009, 98 veterans of Iraq and Afghanistan took their own lives. Their war wasn't over when they came home.

At Thomas Rick's "Best Defense" blog, guest poster Jim Gourley condemns both the military's instinct to hide the suicide epidemic -- and how that practice distorts the public's relationship to our serving military:

We hail those who made the ultimate sacrifice, but we don't consider how to account for the sacrifices of those who died by their own hand. It is a bureaucratic bridge too far for the army to ever establish a connection between combat events and an active duty service member's suicide in garrison, let alone the suicide of a veteran after separation. Yet countless are the mothers, fathers, spouses, and children who will say that these men and women "died over there" and "never really came home."

…a nation's day of remembrance would take on an unbearable melancholy were its citizens brought to remember that the preponderance of its fallen service members died on home soil. By living in denial we protect the greater population from bearing that burden of remembrance.

My 'little' brother is an Iraqi War vet. He served in the first Gulf War and, more recently, the current debacle. I don't know the man they sent home to us this last tour but he scares me. I can't put into words the change in him and I'm at a loss as to what to do to help.

This is the best post on Memorial Day that I have read. If the public weren't so 'Ostrich like' they might rise up and demand "no more wars."