California Republicans: not worth fixating on the elephant 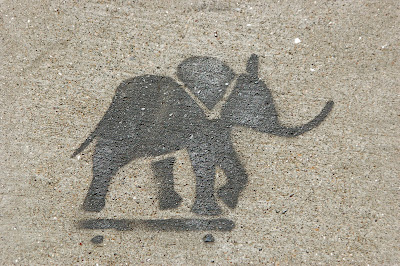 A couple of odd items flew by yesterday. Ed Kilgore highlighted this (via Politico):

“Republicans in California ignored demographic changes,” state Republican Party Chairman Jim Brulte said in an interview. “As a result, we’re a significant minority.” Republicans on a national level should take notice, because players in the California GOP argue that they’re merely experiencing what states like Colorado, Nevada and Texas will experience in a few years: a drastically weakened party that’s routinely rejected by booming minority populations.

That seems about correct, not that I want to see Republicans crawl back from their racist "blunder."

Meanwhile, I learn via Hullabaloo that California Republicans are importing Texas Governor Rick Perry, the guy who couldn't remember what government departments he wanted to kill, for their big fall meeting.

The Texan economy is a hollow mess of low wages, poor education, high poverty wages and flimsy safety nets. The California economy, meanwhile, is resurgent after voters gave Democrats a 2/3 supermajority in the statehouse. Yet Republicans are intent on trying to convince America and California of how well they've run Texas into the ground, and how much the rest of us should want that for ourselves.

Not going to fly here. Guess Perry is looking for right wing money, something we do have.

All this reinforces what I find myself saying every time I get into a political conversation: if you want to see where the country is going, look at California. In this state, Republicans spent the 1970-2000 fighting demographic and economic reality. In the process they broke the instruments of government: we ended up with a state system that mostly could not tax or pass budgets; consequently schools, infrastructure and economic development floundered. But Republicans so marginalized themselves that they became vestigial, only able to win in older, white enclaves.

Now Democrats are striving to rebuild the state. There's a lot that is damaged. Choices have to be made about how we'll go forward. Education, water policy, and transportation can't be ignored much longer. Because politics (and every interest group) abhors a vacuum, that means progressives and the saner business oriented conservatives are now fighting out our futures within the Democratic party. Concerned citizens miss the real action if we don't pay attention; that's where our future is being decided.
Posted by janinsanfran at 6:44 AM