Like so many others, Spaniards and foreigners, we journeyed by train to visit the Moorish/Christian fortress/palace, the Alhambra. Eight thousand visitors are admitted a day, every day. The Alhambra is, rightly, Spain’s biggest tourist draw. And it lives up to its reputation. One of these Saturdays I’ll post some photos of this World Heritage site.

To visit the Alhambra is to spend time in the city of Granada, 300,000 people or so, including a population of 80,000 students at the University of Granada, founded in 1531. The tourist section of the city is also a student section, a warren of old buildings divided into apartments, bar/cafes, and street life. It’s great fun. And Granadans, young and possibly also old, have been taking their opinions to the walls of the city. 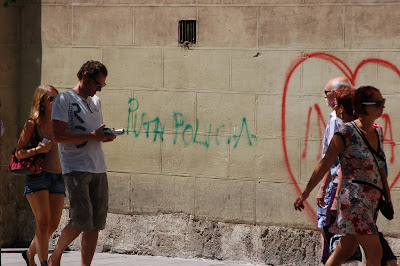 Some sentiments seem universal in young, politically active locales. “Fucking cops” seems a norm everywhere. This was on a wall of the city’s cathedral. 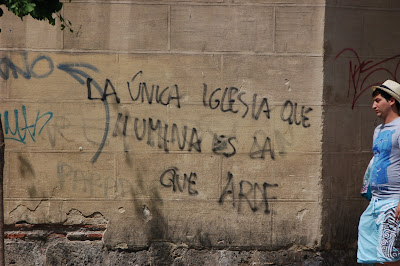 So was this only slightly more complex sentiment: roughly, “the only church that lights the world is one that is burning.” Not what the devout want to hear, but having seen a few Spanish churches, I can imagine the resentment of wealth which inspires the feeling. 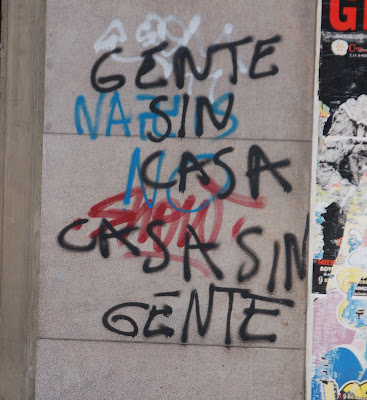 This one is complex. The top layer, in black, expresses the common belief of the unhoused the world over: “People without houses [need/deserve] houses without occupants!” With all the vacancies in depressed Spain, it is not surprising that some of the unemployed might think they ought to have access to empty homes.

Underneath the first layer, in blue, there’s another thought: “Nazis, NO!” (The Z in Nazi is rendered as a swastika.) Where economic distress is great, so, for some, can be the appeal of fascism.

Across from the Alhambra on a steep hillside is the neighborhood called “Albaizin” (various spellings) -- the former medieval Moorish quarter. Its dense, ancient alleys are a tourist attraction in themselves and also an island of pre-modernity in this modern city. And, judging from the neighborhood’s signs, the Albaizin is a prime target for gentrification. Residents are fighting back: 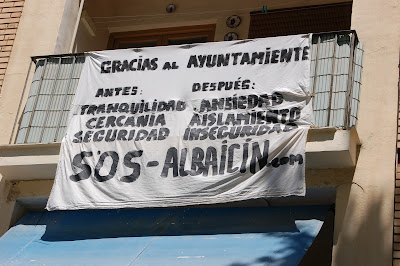 Roughly: “before the city government meddled, Albaicin was a peaceful and safe place; now [by closing a road] they are making it isolated and unsafe.”

Sometimes the sentiment is simpler and apparently more organized: 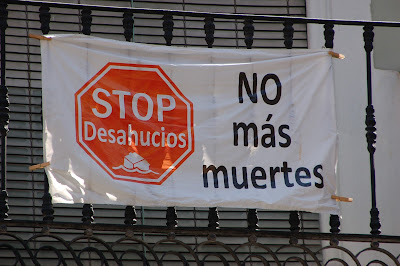 Stop evictions! I don’t know if the deaths are literal or metaphorical, but I know that everywhere resistance to displacement can be a life or death struggle for individuals suddenly finding themselves in the path of development.

On a day when the temperature exceeded 100F, we ducked into an island of modernity, a brightly lit cafe with strong air conditioning. Afterward we were somewhat mortified to discover this graffiti on the outside: 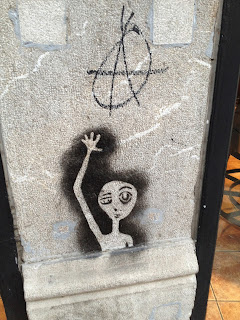 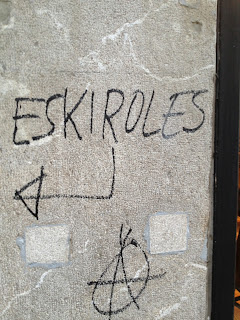 The assertion: “the workers in there are scabs!” It’s hard for scrawled anarchism to trump air-conditioning.

The class struggle seems alive and all too well in Granada.
Posted by janinsanfran at 5:00 AM

We visited Grenada and the Alhambra during that what turns out to have been a very short period of great prosperity in Spain. Quite a different atmosphere. But it was edgy, nonetheless, and we did see some workers' demonstrations. The overbuilding seemed crazy to me.