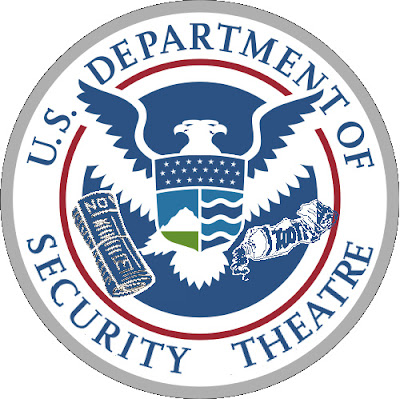 …either give Department of Homeland Security a mandate that includes real urgent threats to the “homeland,” such as resilience in the face of climate change related disasters and possibly even mitigation approaches, or shut it down.

Not likely, but a good idea that keeps cropping up.

Wheeler isn’t the only one. David Rothkopf of Foreign Policy magazine writes that it is time to “declare an end to a decade of fear.”

We have come to what could be seen as the end of an ignominious period in U.S. national security history, one that might be called the Decade of Fear. And though it was the 9/11 attacks that ushered this period in, our response in the months and years afterward defined it far more than those blows ever could. At a moment when the United States could have seen the terrorist threat as being as limited and peripheral, we over-reacted -- grotesquely.

We didn't react to the moment. We didn't seize it. We succumbed to it.

Instead, we allowed our fear to drive the creation of a massive government security apparatus, huge expenditures, and reckless global programs. Compared to the number of people, groups, or weapons systems threatening us, our investment in our response to said threats redefines "disproportionate" in the annals of a government where excess has been a hallmark of our military-industrial complex. And that's saying something.

… with regard to Department of Homeland Security -- and I say this with only a slight hint of my tongue in my cheek -- this moment, when so many top spots in the department are vacant, might just be the perfect time to undo one of the biggest bureaucratic blunders of the Bush years and unmake the government institutions born of fear. I have spoken to no one in Washington ... including very, very senior officials of the Department of Homeland Security and the Directorate of National Intelligence ... who believes that creating those two enterprises did anything other than to create unneeded bureaucracy, expense, and inefficiency. And in so doing, they did not enhance security, they compromised it. …

Fear will not subside, of course, if most of our political leaders have anything to do with it. It serves the executive branch, the warriors, and the spooks, well if we remain willing to accept any infringement of our liberties for fear of “terrorism.” Republicans want to beat up on the administration for doing anything so normal as having enterprising ambassadors who actually talk to the locals. This is dangerous work; sometimes it goes sour. Hence the pseudo-scandal: ¡Benghazi!

Our leaders are certainly not fighting any threat they believe actually puts the United States of America at genuine risk. If they were, they wouldn’t have put up with the sort of bureaucratic wrangling, turf building and incompetence recorded by Mark Mazzetti. The terrorists ensnared a gullible nation in their “security theater” with the help of our own pols; more fool us!

But Bradley Manning and Edward Snowden -- not necessarily personable individuals, but heroic figures both -- have blown the whistle to alert more and more citizens to the free pass to encroach that our spooks have been enjoying. And there are even stirrings in Washington aimed at recovering some civil liberties from the garbage heap. Senator Ron Wyden (D-OR) who has been trying to blow open NSA spying for a long time offered a warning in a speech last month that I’ve only now had time to absorb. Here are some pertinent bits:

If we do not seize this unique moment in our constitutional history to reform our surveillance laws and practices, we will all live to regret it. … The combination of increasingly advanced technology with a breakdown in the checks and balances that limit government action could lead us to a surveillance state that cannot be reversed.

… It is a fundamental principle of American democracy that laws should not be public only when it is convenient for government officials to make them public. They should be public all the time, open to review by adversarial courts, and subject to change by an accountable legislature guided by an informed public. If Americans are not able to learn how their government is interpreting and executing the law then we have effectively eliminated the most important bulwark of our democracy. That’s why, even at the height of the Cold War, when the argument for absolute secrecy was at its zenith, Congress chose to make US surveillance laws public.

… when James Madison was attempting to persuade Americans that the Constitution contained sufficient protections against any politician or bureaucrat seizing more power than that granted to them by the people,he did not just ask his fellow Americans to trust him. He carefully laid out the protections contained in the Constitution and how the people could ensure they were not breached. We are failing our constituents, we are failing our founders, and we are failing every brave man and woman who fought to protect American democracy if we are willing, today, to just trust any individual or any agency with power greater than the checked and limited authority that serves as a firewall against tyranny.

… my question to you is: by allowing the executive to secretly follow a secret interpretation of the law under the supervision of a secret, non-adversarial court and occasional secret congressional hearings, how close are we coming to James Madison’s “very definition of tyranny”? I believe we are allowing our country to drift a lot closer than we should, and if we don’t take this opportunity to change course now, we will all live to regret it.

Wyden, a Senator, evidently finds the national security state nearly as scary as I do. It’s a lot scarier than a few foreign terrorists who might be able to blow up some unlucky ones of us -- and even scarier than our homegrown terrorists who demand the right to tromp around with high capacity magazines in their favorite automatic rifles. We either rein in the fear mongers -- and soon -- or our fear obsessed nation becomes an ever more repressive failure.

Word. I'm sick of the fearmongering.