Is war a quintessentially human activity? 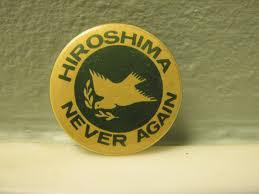 On this day when we remember (or do not remember) the United States’ first use of an atomic bomb on the city of Hiroshima, Japan, in 1945, it’s interesting to look at a current anthropological controversy about the universality of war between humans. Science journalist John Horgan has been devoting his regular blog at Scientific American to this discussion for several weeks.

Apparently there is a school of opinion -- Horgan calls this “the Deep Roots Theory of War” -- that holds that attacks by one group of humans on another group of humans have been a characteristic of the species since time immemorial, dating from well before the adoption of settled agriculture some 10,000 years ago. Steven Pinker, Edward Wilson, Jared Diamond, and Francis Fukuyama are in this intellectual stream. They hope, and opine, that the human animal is outgrowing our addiction to war, but they consider war one of the markers of our species. There’s a contrary current of thought represented by Margaret Mead that holds that “war” -- organized conflict between human groups -- is a rare innovation, not at all the norm for human societies.

Horgan looks at a study of surviving foraging groups that finds very little inter-group violence, though some of what we’d called domestic violence and simple quarrelsomeness between members of the same group. He shares a meta-analysis of human skeletons from before organized agriculture that shows hardly any signs of violent inter-group warfare. And he reports a study of neolithic settlements that suggests that these human groups survived for centuries and even millennia without leaving signs of any form of violence we’d call “war.”

Horgan comes down on the side of Mead and draws out some implications for any peace movement:

… Mead proposed that war is a cultural “invention”—in modern lingo, a meme, that can arise in any society, from the simplest to the most complex. Once it arises, war often becomes self-perpetuating, with attacks by one group provoking reprisals and pre-emptive attacks by others.

The war meme also transforms societies, militarizes them, in ways that make war more likely. The Tiwi [a particular group of Australian aborigines whose society Deep Rooters like to cite] seem to be a society that has embraced war as a way of life. So is the United States of America.

The Deep Roots Theory is insidious because it leads many people to succumb to the fatalistic notion that war is inevitable. Wrong. War is neither innate nor inevitable.

War is only inevitable if we build societies that celebrate it. We’ve got work to do.
***
I have to observe, though Horgan doesn’t, that the Deep Rooters seem a very butch crowd, while Mead’s Inventors seem more androgynous. This may represent a momentary cultural accident -- but I wonder.
Posted by janinsanfran at 5:00 AM