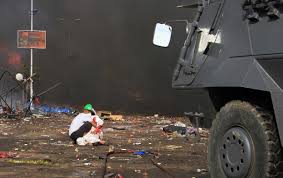 In view of the Egyptian military's brutal violence against the large segment of their own people who think they've illegally seized power, there are loud calls in Washington for the Obama administration to cut ties with the generals.

The Prez announced last week that he'd canceled a planned joint war game -- and was denounced as a wimp from many directions. Let's think for a minute why he might be reluctant to cut off the more than one billion dollars we give Egypt's military annually. After all, this is not chump change.

Obama has shown himself cautious and deliberate in dealing with foreign governments -- and by and large that has been a good thing. Republicans are demanding posturing; that is not the incumbent's style.

However he has also been consistently willing to defer to Israeli interests. The Israelis much prefer a military dictatorship in Egypt to a government headed by the Muslim Brotherhood. On those grounds, we might expect Obama to choose to stick with the generals.

Moreover, Obama can probably assume that any cash the US might withhold from Egypt's rulers will only be replaced by Saudi oil money. Perhaps he thinks he retains some shred of influence if he continues the payouts.

But it is also worth noting that the US has simple, practical motives for staying on the good side of Egypt's generals. USA Today has the story:

During the past year, more than 2,000 U.S. military aircraft flew through Egyptian airspace, supporting missions in Afghanistan and throughout the Middle East, according to U.S. Central Command, which is responsible for the region.

About 35 to 45 U.S. 5th Fleet naval ships pass through the Suez Canal annually, including carrier strike groups, according to the Bahrain-based fleet. Egypt has allowed U.S. warships to be expedited, which often means getting to the head of a very long line of ships waiting for access to the canal.

If US foreign policy requires power projection in west, central and south Asia, we need Egypt's cooperation.
One of the few clear facts about the Egyptian situation is that three quarters of us in the United States don't want our government to get involved. At long last, that might help.

H/t Samuel Knight at Political Animal for the USA Today report.
Posted by janinsanfran at 7:00 AM

It's easier to be an idealist when we don't have the responsibility for the consequences of our actions. I can see how this is a tough call for any leader.

If the generals were threatening to abrogate the Camp David Treaty, funds would vanish immediately.