What the hell is that going to do?

After a weekend of war rumors, it appears today likely that the United States will lob cruise missiles at targets in Syria -- targets that the administration will claim serve to punish the Assad government.

Even liberal commentators seem to think that the murderous chemical warfare attack in the Damascus suburbs last week means that the United States has to "do something."

But what if additional US violence does nothing but raise the level of violence? We're already supplying arms and supporting allies like Turkey that are doing far more.

There is no popular support in the United States for a wide effort to intervene in Syria's civil war. If the administration shoots, it will be because these days a President can, without democratic (small"d") debate, fire at will to prove his toughness. (And I have no doubt that a female president would do the same.) This is war as theater with human victims. 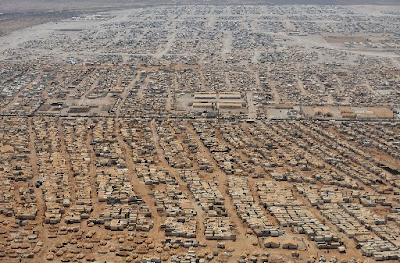 Last month this picture of the Zaatari Refuge Camp in Jordan grabbed my attention. This is what the war in Syria means. These people's lives have become a killing ground for powers great and small. And my country appears ready to add to the carnage -- because it can.
Posted by janinsanfran at 8:02 AM

Godawful, no matter what our government decides to do.

The bad part is how do they decide who used the nerve gas. Rebels had the most to gain by it but Assad has certainly done crazy things before. Whatever the US does, it's a lose/lose in my opinion. I hope Obama has more strength of character than right now it appears :( as this won't be easy whatever he chooses but it better be he does what he believes is right, not just what the 'noisiest' crowd pushes him to do to satisfy them so they can later blame him either way as they still do regarding Libya and in particular Benghazi

I hate to say this, but right now I doubt the American people care much who used the chemical weapons, IF any were actually used. We're all tired of endless war -- even though we are little affected by the war.

We are sick of fighting in the Middle East, because no matter what we do, it's wrong. They all seem to hate us, even while they eagerly take our money.

Unless they attack Israel, let's just stay neutral. We know little or nothing about the rebels and whether they are "good" guys or not. And, should they take power from Assad, who is to say they will be any better for the average Syrian/Lebanese citizen?

Look at Egypt. Look at Iraq. Look at Afghanistan. We have accomplished nothing and spent billions (or trillions, who knows?) to do it.

Let's just stay out of this one.