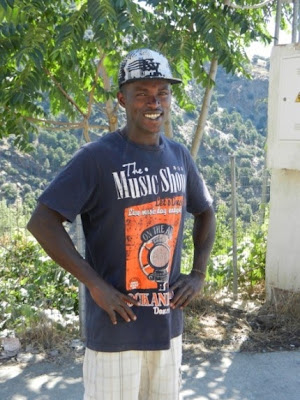 “Honéstamente, me encantaría volver,” Aliou told us. “Honestly, I would love to go home.” Aliou is from Guinea Bissau, a small Portuguese-speaking country in West Africa. For the last two weeks, he’s been living in a migrant workers’ camp outside the little town of Bérchules. It’s one of a string of white villages nestled like clutches of eggs in the Alpujarras, an area in the foothills of Spain’s Sierra Nevada.

My partner and I met Aliou on a week-long hiking trip in this region, walking from village to tiny whitewashed village. Like the other folks in the camp, who come from a variety of African countries from francophone Senegal and Malí in the west to Somalia in the east – he has been harvesting Bérchules’ main cash crop, cherry tomatoes, along with green beans. A combination of war, famine, and economic hopelessness has led these men to risk the perilous journey across the Mediterranean to Europe. The roots of those wars and economic disasters lie deep in European colonial history and are experiencing new growth, with the help of the United States, in the contemporary “scramble for Africa.”

Before his brother encouraged him to join him in Bérchules, Aliou was working in the greenhouses in an area to the east of the Sierra, called Almería. It’s probably best known to people in the U.S. for its deserts, where many “spaghetti westerns” were shot in the 1960’s and ’70’s. But it’s also home to some of the most productive greenhouses in the world, where food is produced both for domestic consumption and for a huge European Union export market:

“The roughly 20,000 square hectares of greenhouses on the southeast coast of Spain churn out fruit and vegetables by the ton on a year-round basis, fueling the province of Almería's economy. The greenhouses are packed together so tightly that they're visible from space,” according to Popular Mechanics.

This route from greenhouse to fields and back is a common one for migrant farmworkers in Spain. It’s not unlike the ones migrants take in the U.S., as Woody Guthrie sang in Pastures of Plenty: “California, Arizona, I’ve picked all your crops. /Then it’s on up to Oregon to gather your hops…” In Guthrie’s day, the some of the migrants were Okies, refugees from Oklahoma’s Dust Bowl, but others were Mexicans, allowed to work while they were needed, then summarily deported, often without being paid. Today, the men and women who harvest our food come from a variety of Latin American countries – Mexico, certainly, but also Central America – as well as from the Philippines and Southeast Asia.

“Es difícil decir cual es lo más peligroso,” said Omar, “el viaje del desierto o del mar.” It’s hard to say which is more dangerous, the journey through the desert or the one by sea. We’d missed the bus out of town (but that’s another story!), and Omar agreed to drive us to Orgiva, where we could catch it up. We’d been surprised when the hotel owner said the person who could help us was called Omar – it’s not common for Spaniards to have Muslim names. I’d met several Omars in Central America, but none in Spain, for obvious historical reasons. (The last Muslims were driven out of Spain along with the Jews by the monarchs Ferdinand and Isabella in 1492.)

As it turns out, Omar is from Colombia. His wife is from Peru, and his children, born in Denver, are U.S. citizens. When he lost his job as a banquet manager at a Denver hotel in 2008’s worldwide economic crash, a Spanish friend he’d met while working on cruise ships year earlier invited him to come work in the hotel he’d bought in Bérchules. He confirmed our suggestion that, as in the United States, migrant workers are tolerated because their labor is crucial to the agricultural sector, but because of their illegal status as “economic” migrants, they have essentially no rights. Omar is in a better position, having legal permission to work in Spain, although both he and his wife had to return to their home countries and petition the Spanish embassies there to secure that permission.

The Alpujarras were until the last few decades one of the most isolated areas of Spain. With few roads and no train service, they were a self-contained region, where rural people produced whatever they needed for life with very little outside provision. Indeed, vestiges of the old weaving and spinning culture still remain today, descendants of a time not very long ago, when women produced all the towns’ cloth and rope.

This is not, however, the first time the Alpujarras have been touched by global events. Until the end of the 15th century, almost all its residents were Spanish Moors. These Muslim people were the ones who over a thousand years ago established the irrigation and drinking water systems that still serve the region’s farms and villages. They cut the terraces into the hills and built the wide stone threshing circles that dot the hills here.

When Alpujarras Moors rose in arms against the expulsion orders, most of them were killed. The remaining population made more or less genuine “conversions” to Christianity and stayed. The Spanish monarchy then engaged in an early population transfer, bringing in people from all over Spain (using a combination of inducement and compulsion), who knew nothing about how to survive in the Alpujarras. The remaining Muslim conversos taught them. For centuries, the Alpujarras’ material culture was essentially a Moorish one, although the building at the center of each village was now a church.

What’s the point of all this? I guess it’s just one microcosmic example of the ways that human beings are tied together in a global net of relationships. For some of us, the net is a web of joyful connection. For others, through the machinations of power and greed, that net is only a trap.