Revolution: "a long process of social and political transformation" 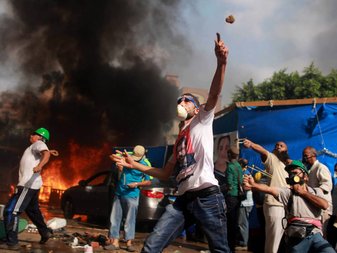 The news out of Egypt is grim, painful. I trust very little of what I read or hear reported. I know I don't know what is going on. But in this moment of bloodshed, military violence and apparent religious and social polarization in that country, I remember something suggested by the editors of the Middle East Research and Information Project (MERIP) over a month ago:

Was the gathering of millions in Egypt on June 30 the continuation of a revolution or the occasion for a coup d’état? The answer is “both,” but the question is not the right one to ask.

There is, first of all, no necessary contradiction between the two terms. All of the revolutions in human history have involved the overthrow of heads of state by force or the threat thereof. The revolutionaries, whether they wield weapons themselves or not, must commandeer a portion of the state’s army or persuade the soldiers to lay down their arms. The French Revolution -- the canonical model -- took nearly a century to complete, during which period there were three republics with three different constitutions, two empires, two restored monarchs and plenty of interceding events that might be called “coups” and “counter-revolutions.” …

… there remains ample reason to believe that [the Egyptian military's] coup is a moment in a long process of social and political transformation that will continue for years to come. …

Democratic social revolution as a series of struggles, a long process … I'd say the idea is almost "un-American." In this country, we are raised on a fantasy of a single "revolutionary" moment in 1776 that led to the establishment for all time of a perfect system of government that has endured without much trouble ever since.

This is nonsense of course.

Most obviously, U.S. society and governance was shaped by a brutal civil war to end slavery. This war extended citizenship to all males born here -- and killed some 750,000 combatants -- out of a total population of some 32 million. It too was part of our revolution.

The successive struggles of the excluded -- men without property, religious dissenters, women, people of color, gays -- for full citizenship have left less obtrusive death tolls, though they've cost plenty of lives. We've made a lot of progress.

And those struggles aren't over. There are forces that are doing their damnedest to shove most everyone but rich white men out of political participation. (See my friend Bob Wing's current summary.) This country's "revolution" isn't complete -- it isn't even over.

Neither is Egypt's.
Posted by janinsanfran at 5:00 AM

The news from Egypt is brutal and it is impossible to figure out whether it truly has been a military coup or a group of people who each want to control the other and some sort of revolution. Do the people expect too much for their culture? I read something blaming Obama for not doing more but is the US really responsible for every other country? The one thing I would question is continued aid until our experts figure it out. We have helped the wrong side before and sorting out good guys from bad is nigh unto impossible when we only vaguely understand the culture. It is depressing though as most of us hoped Egypt, with its proud history, could manage a good life for its citizens. It can't do it without jobs. Depressing...

As for our country I don't know that we are a revolution (yet) so much as a divided people. Seems to be human nature for maybe as much as one-third of the world's population (those not worried about starvation) to want to push their will onto everyone else. One-third think they know the best way for others to live but won't try to force it and the rest just want to be left alone. Heck they are still writing books arguing over why we did fight the Civil War or War of Northern Aggression or War Between the States or...

"We have helped the wrong side before.".....
Are you going for the understatement of the month?
Like supporting Israel over Palestine for the past fifty years.
(Due to a ruling class which would make it impossible to do "right" in the Middle East, if we concede the judgement of "right" to the
prototype Middle Eastern man/woman in the street.)

Like being harsh on Iran and kind to Saudi Arabia, even though Iran is far more democratic?

The US should simply get out of the Middle East.

It (the ruling class thereof) has no desire to do good, nor
capability of doing so.

Ask the vast majority of Iraqis, still reeling in anarchy from US destruction of their nation, ask even those who hated Saddam.

As usual, you've taken the long view, which is surprisingly refreshing.